Earlier today we reviewed Shelter, a mobile game that puts a twist on the survival genre by blending turn-based card battles with tower defence elements.

Industry veteran Chris Roberts was kind enough share some words regarding the gameâ€™s development, and also the future of the series.

Shelter was made entirely by yourself. Did development go smoothly?

Up and down to be honest. There were a few times where life outside the game took over and messed with my schedule. It definitely took longer than I had planned, but there was never a point where it was too much.

XNA was a great framework to write the game on, and it’s a real shame that that will no longer be supported going forwards. The MonoGame team has done a great job in taking up that mantle though, and despite a few wobbles, the process of porting to other platforms has been fairly smooth.

Do you have any advice or â€˜wise wordsâ€™ for other â€˜one manâ€™ developers?

I guess the most important thing is to be realistic with what you want to achieve. If I let myself then I would love to make my own interpretation of Fallout or Stalker or a hundred other games, but it’s just not possible. Once you establish some ground rules and stick to them, you can have a lot of fun developing just about anything.

It’s not about over-reaching as much as it is about focussing. The bigger your ideas, the broader your vision and the less you can focus on the details that make a good game.

Which single aspect are you pleased with the most?

It’s really hard to choose. The art style has been really well received and seems to be the first thing people mention. I guess that I’m most pleased with the fact that people seem to understand the game mechanics so quickly, though. I was a bit worried that players wouldn’t take to the whole dice-rolls and castle-defence thing, but it seems to have gone down really well.

Were you happy with the gameâ€™s reception when it arrived on Windows Phone?

Shelter garnered some really positive feedback when it was launched on Windows Phone. Obviously a single-player zombie card duelling game isn’t going to hook everyone, but I was blown away by how highly it was rated and also by how well it charted.

Despite this, the market does seem really weak. There is no way I could survive as an indie developer on the money I’m getting from Windows Phone. A rather pointed example is that Shelter hit #1 paid games in Thailand, and yet to this date has only sold 8 copies there. 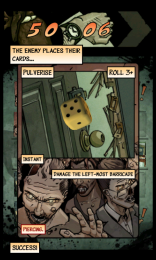 Indeed. I was also inspired by The Sacrifice by Valve and the awesome DMZ graphic novels.

One of the main features of the artwork is that I had to be able to go from idea to illustration very quickly. I had to illustrate between 5 and 10 cards a day when I was onto that, so getting a result that looked good quickly was very important. Most comics and graphic novels put a lot more detail into the line-work and hatching than I could, so my look ended up very sketchy.

There are lots of zombie games out there. Did you worry that Shelter would vanish amongst them?

I did worry a bit. I had wanted to make Shelter into a game about end of the world tropes, and not just zombies. I had envisioned a story that went from zombies to vampires, to robots and aliens. That was just too much for me to do in the time I had, so I had to cut the story down to the bare minimum.

Hopefully I can have a bit of fun with that with some additional content and sequels, though.

Did Shelter turn out how you originally envisioned it in your mind?

Not at all. The design process for Shelter was very iterative. My original vision was for something like Metal Gear: Acid, with the cards acting more as an inventory and the game being more of a character based board game. The gun mods were born out of that, but almost everything else has been scaled back and re-evaluated until the original idea barely relates to the released game.

Early on I decided what limits to set myself and design within. I decided to go single-player (with a view to co-op) with no AI. I added new limits every time the scale of the game looked to be getting too big. When you have those limits, you can find creative ways to work within them and hopefully something unique is born out of that.

Nintendo are reportedly trying to woo mobile developers over to the Wii U. Is an eShop version something thatâ€™s possible for the future?

It’s possible, but it’s not top of the list. I am going to try and bring Shelter and its sequels to as many platforms as I can, but some of them require larger changes than others.

I can see the Wii U controller being perfect for playing this type of game, but making the game work with that would require me to add some large, platform specific features and this is quite a difference from how I have developed the game so far.

At the moment, the majority of the code is shared between the 3 mobile platforms. This means I can add features, patches and content to each platform simultaneously and that’s really important for me. I can also see this approach working if/when I expand it onto PC, Ouya, PS Vita and others.

I do like the idea of the Wii U, though. If I thought I could afford to bring the game to it then I would definitely try.

Any tips for new players?

Experiment! Try out the different allies to get a feel for different play styles. Don’t just go for guns, as you’ll need to balance your deck for the zombies that counter them. Oh, and if you have a problem or a suggestion, get in touch. I’ve made a few tweaks to the balancing and play rules based on feedback from Windows Phone players and I’m happy to hear what people think does and doesn’t work.

Lastly, during a zombie apocalypse what would you do to survive?

Whatever it took… …I’d probably only last 5 minutes, though :P.