We didnâ€™t have to scratch ours heads for long to figure out why screenshots of Atlusâ€™ movie tie-in R.I.P.D bare a sense of familiarly – it would appear to be a reworked version of the recent XBLA/PSN title God Mode. 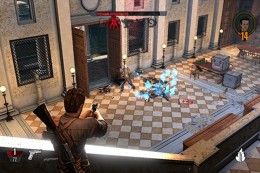 Thatâ€™s not entirely a bad thing – the arena-based third-person shooter had a lot going for it, including a focus on co-operative play and a relentless pace.

Whereas God Mode supported four-players though, R.I.P.D (which stands for Rest in Peace Department, if you’re wondering) will be two-player only. Presumably one player takes control of a virtual Jeff Bridges, while the second player fills Ryan Reynolds’ boots. Or visa versa.

What makes us think the two are going to be very alike? Presentation, visual quality and a few of the effects shown in the screens all seem incredibly similar. 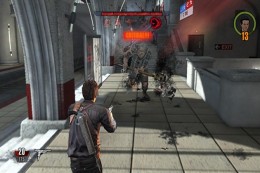 Moreover, Old School Games are including a near identical sounding XP gambling system – God Mode let you earn XP for going into battle without shields and such while R.I.P.Dâ€™s press release talks of a â€œvirtual betting systemâ€ to gain additional in-game currency.

Of course, the proof will be in the playing as to how close to one another they are. We don’t have long to wait to find out – itâ€™s due this summer, priced at 800 MSP on Xbox Live and Â£6.99 on PSN and Steam. The movie is out 17th July, so we assume it’ll be released near that date.

Considering that reviews of God Mode were mostly positive, we think itâ€™s already safe to say that itâ€™ll be one of the better movie tie-ins of recent times.