Activisionâ€™s take of the TV show sensation includes a cheeky nod to Skyrim – an achievement called â€˜I used to be human like youâ€™ which is gained by shooting a walker in the knee with an arrow. Why are we telling you this right at the start of our review? Because it’s the only thing about Survival Instinct that we want to remember.

a Â£40 joke without a punch line

Now that you know the best thing about the game, youâ€™ll never have to experience its shoddiness first hand.

This first person shooter has at least had some thought put into the design – rather than being a linear and brainless zombie basher, there is a degree of freedom. Playing as Daryl, youâ€™re able to pick destinations on the map to travel to next as your way over to a reported evac zone in Atlanta. Only one route can be chosen per adventure, so to see everything and find all the survivors will take two or three playthroughs.

Chances are though that youâ€™ll want trade this one in for something else within record time. In an age where polished shooters are released at a rate of one or two a month, Survival Instinct feels like a throwback from the previous generation. We honestly thought the days of invisible walls, irregular physics and levels that include no more than three or four buildings to explore were beyond us.

Scavenging for supplies plays a big part, especially when you take into account that half the mission objectives involve finding enough fuel to carry on your journey. Before a mission start the aforementioned survivors can be handed weapons and sent out to look for items. You donâ€™t get to see them carry out their task as you undertake whatever tedious quest you’ve been given; youâ€™re simply informed of what they found at the end of a mission. Itâ€™s a decent enough idea but we never felt as if we had to rely on survivors for essential survival items because ammo and health packs are both easily found.

Gas – or petrol, if you prefer – is much harder to come by. If you donâ€™t have enough fuel to travel to the next location then your vehicle – of which there are several to find, each with inventories of varying sizes – will breakdown or grind to a halt. This prompts an event to occur, during which you have to locate a spare part or fuel tank that has been randomly placed in a relatively small environment. You also get the optional choice to stop now and then and search areas for supplies. This would be great if only the environments werenâ€™t endlessly recycled – we once made two ‘pit-stops’ in a row at identical gas stations. The only thing that had changed was the placement of the items.

Those who prefer guns to melee combat will be pleased hear that Survival Instinct can be classed as shooter rather than a survival horror adventure. During the final few missions in particular a variety of heavy weapons are added to your arsenal. We found this most handy as by this point all we wanted to do is run and gun our way to the proverbial finish line. 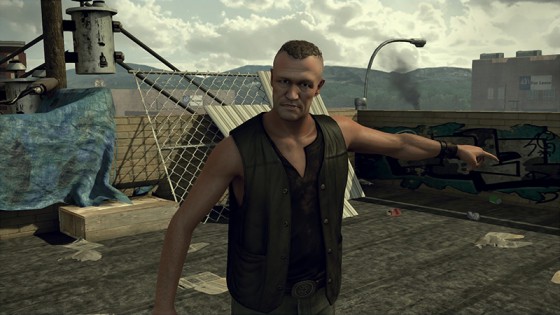 Moreover, any attempt at adding a few scares into the proceedings are instantly overturned by the low production values. Only the voice acting impresses, provided by two of the showâ€™s stars. The poorly animated zombies look like theyâ€™ve shambled from a crusty old original Xbox game while the environments arenâ€™t much nicer to look at. Indoor locations have a very sterile feel, with little in the way of detail. This really puts a damper on the atmosphere, as does the fact that the torch can be used indefinitely. If it flickered or could only be used for a few moments, then maybe we would have felt the tiniest bit of tension.

Whereas slaying the undead in such games as Dead Island, Resident Evil and Dead Rising is vastly amusing despite the zombies posing a threat, even bagging a headshot in Survival Instinct feels unsatisfying due to a lack of flair and finesse. Your everyday shuffling walker is the only type you ever come against, and even for a member of the undead theyâ€™re dumb. Sound is just about the only thing they react to – fire a gun and any in the vicinity will come running towards. We quickly learned that when walkers give chase the best course of action is to simply climb onto something – like one of the many abandoned cars – and fill them full of lead out of harmâ€™s way.

Stealth? Itâ€™s as basic as it could be. As long as you crawl and donâ€™t enter a walkerâ€™s field of vision theyâ€™ll act blissfully unaware. Every single one can then be defeated giving them a shove, strafing behind as they recoil, and then plunging a knife into the back of their rotting cranium.

Their incredibly predictable temperament makes combat tedious. Swapping weapons when under pressure is bothersome too, painstakingly requiring a flick through the inventory while the walkers draw nearer and nearer. Theyâ€™re also bit too grabby for our liking – being caught in their grasp takes a well timed button press to escape. If you donâ€™t then shove them back immediately theyâ€™ll grab hold again, leading to one very swift and early death. The fact that checkpoint placing is all over the place is sadly not the only thing to suggest that not enough time was spared for the developers to test it thoroughly before release.

Perhaps with another six months or so of development Terminal Reality would have been able to create something passable. As it stands, it feels like a Â£40 joke without a punch line.