If we were asked to describe the special E3 Nintendo Direct in one word, that word would be â€œsafeâ€.

The itinerary read like a list of everything we expected, with very little in the way of surprises. Thatâ€™s unless you count Bayonetta receiving a new haircut, anyway.

Pokemon X & Y started the pre-recorded exposÃ© off, with the announcement of an 18th Pokemon type – fairy. Giggle all you want – this new type is super effective against dragons. The lovely looking sequel will also have some virtual pet elements that let you feed and play with your Pokemon to â€œform a bond” between them.

No time was wasted introducing the promised Super Mario 3D World for Wii U. It’s a continuation of the Super Mario 3D Land series, viewed from a very similar perspective. A few people on our Twitter feed even mistook it for a new 3DS game, due to it sharing the chunky visual-style. Iwata drew a comparison with Super Mario Bros. 2 – four different characters are playable and each has their own unique skill, including Peachâ€™s ability to float. Mario can also don a cat costume that allows him to run along walls and pounce on enemies. If Nintendo doesnâ€™t bring back Mouser for one of the boss battles then that would be something of a missed opportunity.

Mario Kart 8 was another title Nintendo had previously promised to show, and the Kyoto giant really delivered the goods with this one – it looks superb. Visually itâ€™s very appealing, plus thereâ€™s a sprinkling of innovation – the karts (and bikes!) can transform into futuristic-looking vehicles that are able to drive along walls and such. Underwater and gliding sections feature too, as per Mario Kart 7. Nintendo claimed that the online modes will be far greater in number than ever before. The bad news? Itâ€™s not out until next year. This is something of a blow – if there was one game almost certain to make the Wii U fly off shelves this Christmas, it would be this.

Only the humble Nintendo would take the chance to apologise for a couple of delays during a conference – both Wii Party U and Wii Fit U have been pushed back from summer to winter. Weâ€™d wager that they’re waiting for the Wii U user-base to broaden – right now the majority of users are long-time Nintendo fans.

Iwata then pointed out that the quality of art on Miiverse has been outstanding, leading them to develop a new Art Academy for Wii U, along with additional tools for Miiverse. These are coming during the summer.

As predicted during our E3 preview, a montage of third-party games was shown including Assassinâ€™s Creed IV, Watch_Dogs, Rayman Legends, Deus Ex, Scribblenauts: Unmasked, Batman Arkham Origins and the promising Sonic Lost World. This was then followed by a collection of eShop footage, such as Capcom’s DuckTales Remastered and an unexpected reveal of Oddworld New â€˜nâ€™ Tasty.

No new Zelda was confirmed, but we did get to see lots of Wind Waker HD footage. To make up for the lack of GBA compatibility which the original offered, new Miiverse features are being added that allow you to send messages in bottles to other players. 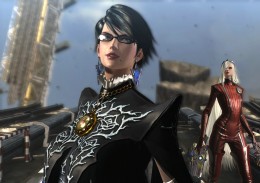 Pikmin 3 was absent but the very similar looking The Wonderful 101 was shown. Honestly, it looks more wonderful every time we catch a glimpse of it. Despite what CVG said last week, in-game footage Bayonetta 2 was indeed shown too with Bayonetta sporting a shorter hair style. A brave thing to do, considering DmC fans went mental when Danteâ€™s hair was altered. What an odd thing to be sensitive about, eh? A two-player mode is being added, although itâ€™s not clear if itâ€™ll be competitive, co-operative, or even some form of online mode.

One of the few surprises on show was Retro Studiosâ€™ title. Thereâ€™s been an air of mystery about it for quite some time – rumours have included a new Metroid Prime and a Starfox Adventure-style RPG. Sadly, their surprise isnâ€™t anywhere near as expecting as these – itâ€™s a Donkey Kong Country Returns sequel, subtitled Tropical Freeze. The premise is that Donkey Kongâ€™s island has been invaded by Vikings, and so the ape and his cohorts – including Dixie – try to reclaim their homeland. It’ll be the first ever HD Donkey Kong title, reports Nintendo.

Monolith Softwareâ€™s X (which is possibly a codename) was one of the few new IPs given an airing – a beautiful looking open-world RPG from Xenogears creator Tetsuya Takahashi.

Feast your eyes on the trailer:

The final game was another than Nintendo had previously promised – the new Super Smash Bros for Wii U and 3DS. Mega Man and a random Animal Crossing villager were confirmed as new characters. Or challengers, if you prefer. If we were gambling men we would have bet that Sonic and Bayonetta would have shown their faces. Platinum and Sega are both pretty chummy with Nintendo these days, as youâ€™ve no doubt noticed

Although itâ€™s understandable to feel disappointed by a lack of surprises and new IP, every game shown did look as good as the last. Yes, Super Mario 3D World may not have had the same â€˜wowâ€™ factor as Galaxy did when it was first revealed and perhaps another Donkey Kong Country isnâ€™t the best use of Retro Studios’ talents but we have confidence that they’ll be as every bit as good their predecessors.

Hopefully Super Mario 3D World Land wonâ€™t be quite as easy as its 3DS counterpart, mind. Now that was a game more than slightly generous when it came to 1-Ups.