When PopCap first set out to create Plants vs. Zombies we very much doubt that even in their wildest dreams would their twee little â€œflower defenceâ€ game be transformed into third person shooter. 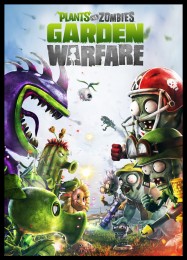 A shoot’em up powered by Battlefield 4‘s Frostbite 3 engine, no less.

Plants vs. Zombies: Garden Warfare is an announcement from E3 that we really didnâ€™t expect. Weâ€™re incredibly intrigued – if PopCap gets it right, it could be the freshest feeling shooter around.

Itâ€™s a class-based affair, offering 24 player online battles along with four-player co-op modes, including one likened to Gears of Warâ€™s horde mode. As well as new plants and zombies, existing ones can be customised to give them that personalised touch.

The trailer does a very good job of filling us with confidence that itâ€™ll retain the look and feel of a PvZ game:

Going by the early footage you’ll be able to unleash a giant zombie onto the opposition’s garden gang. We also spotted the cactus – who’ll act as a sniper – and a ‘chomper’ plant that can swallow zombies whole.

Xbox One will be the first console to sprout a version, with an Xbox 360 version to follow. PC and PlayStation versions are also panned.

Itâ€™s not due out until the Spring, but worry not – we only have to wait until mid-July to get another PvZ fix, in the form of the free-to-play Plants vs. Zombies 2.