The kindest thing you can say about The Devilâ€™s Cartel is that it works. Moving from one ever-so conveniently placed piece of cover to the next is a breeze and your AI controlled team-mate listens to and acts upon your every command, like a well-trained pet.

Car-loads of baseball cap wearing gang members also always arrive right on cue, going down with one well-aimed headshot like they should. EA hasnâ€™t reinvented the wheel with this third-person shooter, but neither has it broken it in any way. Then again, EA pumps shooters out like nobodyâ€™s business â€“ there have been four this year alone â€“ so it was pretty much a given that the fundamentals would be present and correct.

It is at least a slightly different game from the previous Army of Two titles, with a grittier feel and a new slow-mo feature replacing the infamous aggro meter. Mercenaries Salem and Rios have now been reallocated to the backseat, allowing two newcomers to step forward. Itâ€™s easy to comprehend why it went under the name of Army of Four at one point – the previous protagonists show up occasionally, showing off their years of experience and lending some heavy firepower.

Mexico provides the setting â€“ shanty towns, farms, warehouses, narcotics factories and the like. When you arenâ€™t crouching behind cover youâ€™re either behind the wheel of an armoured car or a helicopter chain gun. These fast-paced sequences provide a bit of variety, if only for the couple of minutes that they last. Once done and dusted, youâ€™re back to ducking and diving out of harmâ€™s war in bullet-riddled environments.

Although not particularly gripping, the story flows smoothly enough. It is however very hard to tell when one level ends and the next begins, as they blur into one giant lump.

The first couple of hours in particular border on the tedious. The main bad guy is known as â€˜El Diabloâ€™ – that’s how clichÃ©d it is. The only real highlight from the first half of the game is a shoot-out in a town square being prepared for Los Dias de Los Muertos – a Mexican celebration of both life and death. Here, boxes of fireworks have been haphazardly placed, temporarily providing the predominantly grey backdrops with a splash of colour when fired upon. 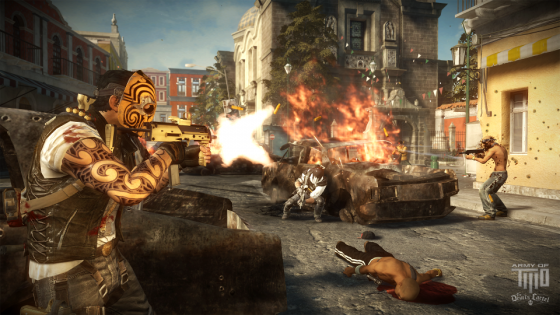 Itâ€™s only during the last few missions that the difficulty level rises towards the realms of challenging, with Alpha and Bravo up against helicopters and hired muscle armed just as heavily as they are. Thankfully your AI partner is more than sufficient at healing when youâ€™re downed. We only seemed to die if they were caught in a random close-quarters melee knife fight when sprinting to our assistance.

As well as the previously mentioned slow-mo feature – during which neither health nor ammo depletes – thereâ€™s an overlay in place designed to show the best path through a battlefield. Itâ€™s a pretty useless addition all told, seemingly only there to boost the list of â€˜new thingsâ€™ the developers have included. In actual fact, the time we ever used â€˜Two Visionâ€™ (as its known) was when instructed during the pleasingly brief tutorial. One feature that’s slightly better implemented is the scoring system – like Gears of War: Judgment, every kill is rated. A no-thrills kill bags 10 points, while head-shots, melee attacks and combos are worth significantly more. At the end of each level score are then added to a leaderboard.

The better your score, the more money you earn. There are loads of weapons and upgrades to purchase but we never felt the need or desire to, apart from giving the starting rifle a few improvements. Every enemy drops a weapon on the ground when killed – why splash the cash on a powerful rifle if you can just pick one up off the floor?

Other superficial accessories include a range of different masks – plus the chance to customise your own – and a catalogue full of tattoos and outfits, including some designed by Inked and Skullcandy. Yes, the same Skullcandy who manufactures headphones. Good old EA licensing agreements, there.

We didnâ€™t dread every minute of The Devilâ€™s Cartel, but the moments that it engages are few and far between. The enemies were falling like dominoes and pretty explosions filled the TV screen but the effort required by ourselves was purely minimal. If EA chooses not to bring Army of Two to the next generation of consoles, then we canâ€™t say we would feel particularly bothered.