Youâ€™d have to be either very dumb or incredibly naive to deny that Dumb Ways to Die is a blatant clone of Nintendoâ€™s Wario Ware. Unlike many of the App Storeâ€™s copycats though, itâ€™s very easy to look past the plagiarism on the account that it has clearly had a bit of love and attention put into it. 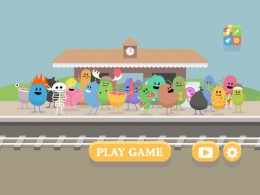 A little bit of history: Dumb Ways to Die began as a safety video from Metro Trains Melbourne to prevent stupid people from messing around on train tracks. Thanks to a daft sense of humour and lovable cast of characters the video went viral, spawning the game seen before you. There is still a hint of educational value present here, but donâ€™t let that put you off.

Like the game it imitates, Dumb Ways to Die offers a quick-fire burst of mini-games lasting just a few seconds each. Tapping, swiping and tilting the screen are common themes â€“ tapping wasps off a little yellow chapâ€™s face, wiping puke off the screen and keeping somebody upright by tilting your iDevice are just three of the tasks at hand. Every mini-game is as smartly presented as the last, complete with a few little nice touches here and there. 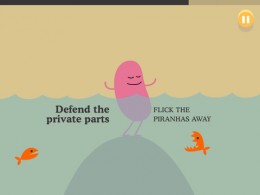 Another mini-game entails blowing into the mic to keep a plane in the air. A lot of players reported that they struggled to get this one to work properly, and thankfully an update has already been released so that it can be omitted. Weâ€™ve also heard that people struggled to wipe the puke off the screen when playing the vomit mini-game on an iPad â€“ the time limit is too tight and the screen too wide.

Indeed, Dumb Ways to Die isnâ€™t scared to be a little bit grizzly. Failure to get that plane in the air ends in decapitation, and for better or worse we don’t think we’ll ever get to swipe away piranhas from Wario’s private parts.

An 8-bit style chip-tune soundtrack constantly plays in the background, becoming faster as the mini-games speed up and become more frantic. As the time limits tighten, the trickier they become. Fail three and itâ€™s game over. 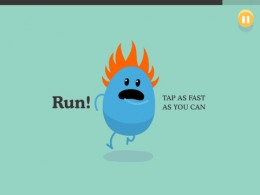 As well as beating your top score, there are a couple of other reasons to keep playing. After reaching certain milestones a new little fellow is added to the train station on the gameâ€™s main menu, and thereâ€™s plenty of them to collect. The original video is also an unlockable, although it only takes a few plays to unlock.

Sadly, it also only takes four or five plays to see all the mini-games. Theyâ€™re alarmingly short in number. If more had been included then this could have easily been the App Storeâ€™s answer to Wario Ware. A genuine alternative. As it stands, itâ€™s simply a pleasing distraction until something else more substantial arrives.