The tech press is getting in a right froth over smart watches. Honestly, don’t they remember the Game Watch?

The calculator watch had been around since the 1970s, and a decade later the next step was the game watch. US company Nelsonic Industries was at the forefront of this exciting technological frontier.

The games were basic, and they typically couldn’t be played on your wrist – but they were often licensed, which was clearly the selling point. Nintendo were remarkably keen to pimp out their properties, and in 1992 three of them made it over to Europe through Zeon.

As Super Play put it at the time:

Of the three, Tetris is probably your best bet. This is probably the most addictive puzzle game ever, and one which adapts to on-wrist technology quite neatly. This version has been cut down a little from the original – the screen is only six blocks wide – but it plays just as well.

Inevitably, Tetris was the one that I didn’t buy. Like all 11-year-olds, I was an idiot.

So let’s have a look at the Super Mario Bros. 3 and Legend of Zelda tat I probably wasted a perfectly good Christmas present on. 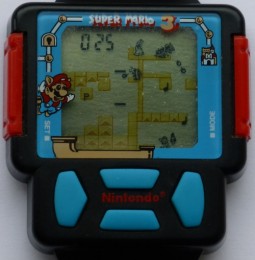 To be fair, the Super Mario Bros. 3 one wasn’t bad. It didn’t exactly have much in common with its inspiration, but it was a pretty passable attempt at getting a platform game to work on a watch. A watch, for Christ’s sake.

The LCD format meant that everything – enemies, obstacles, items – had a just a few possible positions, and with repetitive patterns the whole thing had a strictly clockwork movement to it. Each time you defeated Bowser and rescued the Princess, you’d get to do it again, just a little bit faster.

Each repetition involved jumping over Goombas, avoiding a fireball while descending on a moving platform, hitting the P-block to open the pipe, going through the pipe, grabbing the leaf, jumping up the other side of the screen through special blocks, and defeating Bowser by bashing him from underneath. Observe the excitement:

Not exactly captivating stuff, but as a little high score chaser, it really wasn’t bad.

The Legend of Zelda 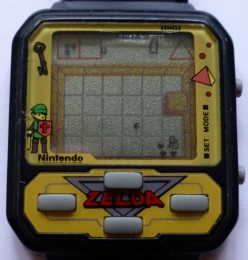 The Zelda-inspired Game Watch, on the other hand, really was very bad.

Each room required you to avoid enemies, grab a weapon, defeat those enemies, grab a key, and get out. If you weren’t quick enough to get out, your score would start to deplete. Why? No idea. At the end of every fourth room, you had to defeat a dragon. Do that four times, and you were done.

The sad thing is, on eBay they now go for more than the Â£10 they retailed for at the time. There’s a lesson for us all there: if an old Nintendo product is now rare, it might just be because it was rightly unpopular at the time.