The first thing that entered our mind when playing this Xbox Indie title was whether or not the developers had cheekily pinched Haloâ€™s grass texture. Thatâ€™s a compliment more than anything â€“ Halo had the best looking grass around, and for quite some time. Evidentially we spent a lot of time staring at it.

We may never know if Rendercode Games have pilfered Haloâ€™s most famous of textures, but we can tell you that The Monastery has a very humble feel to it.

Armed with just a flashlight, youâ€™re tasked with retrieving bibles scattered around the ruins of a reasonably large monastery.

This quest may seem a little tedious initially, but once a few bibles have been found you soon learn that youâ€™re not alone. Inside the ruins lie demons that are quick to give chase. Since combat doesnâ€™t feature, all you can do is run. In the blink of an eye it goes from being a fetch quest to a rather deadly game of â€˜cat and mouseâ€™. We suppose this would mean that the bibles are now cheese.

Thankfully the ability to run faster than the evil that lurks inside provides the upper hand. This doesnâ€™t mean that the demons donâ€™t pose a threat, however. As more bibles are found they increase in number.

In a genius twist, you canâ€™t run and use the flashlight at the same time. Nor can you run indefinitely either. Coming face to face with a demon emerging from the shadows is harrowing experience, backed by some suitably eerie sound effects. Music and lighting too help to induce tension, with the music in particular of a higher standard than you may expect.

Finding the first half dozen bibles isnâ€™t too taxing, but finding the last one or two can take time and an awful lot of backtracking. As well as ruins above ground, thereâ€™s also a small underground section to explore. The fact that we could see a demon stomping around inside made us not want to enter, even though we had no choice. As we hastily sprinted down the corridors searching for that elusive last bible, memories of the Spectrum classic Monster Maze 3D came flooding back. 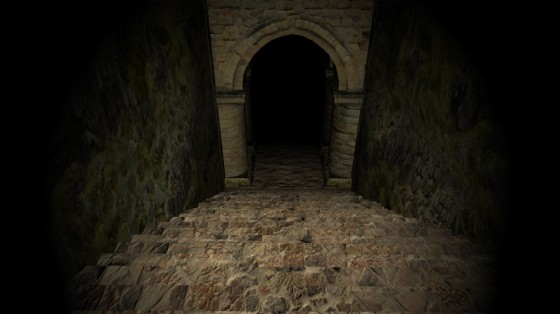 A lengthy experience The Monastery isnâ€™t, but the 80 MSP asking price accommodates for this. Our first jaunt around the ruins took us just under 20 minutes, and other than a choice of difficulty levels and the chance to record a faster time on the leaderboard there isnâ€™t much incentive to return. Donâ€™t let this put you off though â€“ it may be a short game but itâ€™s one thatâ€™s almost faultless in execution, save perhaps for the demons’ rudimentary AI.

As gross as it may sound, itâ€™s the first game weâ€™ve played in a long time to cause us to leave sweat on the joypad. Unhygienic? Probably. The sign of a good game? Absolutely.