With the third Xbox being unveiled this evening, it seems like a good time to look back at how Microsoft approached launching the first – over a decade ago now.

The tagline ‘Play More’ is well-remembered, mainly thanks to the Champagne TV ad. The print campaign was just as unusual, but has been largely forgotten. Fear not: back issues of Edge have been dusted off, so let’s have a bloody good look.

There were a couple of pre-launch adverts in late 2001, quite different in tone from what was to come. The first, in the December issue (E104), promoted the Xbox Experience tour, and featured a nice bit of implied cartoon violence.

The second, in the Christmas issue (E105), was presumably intended to limit the damage the PlayStation 2 would do over the festive season. It attempted to convince readers that Christmas would only happen when the Xbox launched. It didn’t work. Microsoft 0, Jesus 1.

With the UK launch in March 2002, the February and March issues (E107 & E108) featured the launch campaign proper. Apologies for the following image. 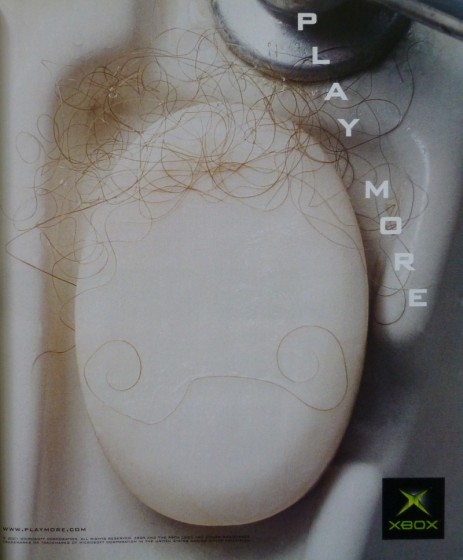 Maybe it’s a rare case of internet self-censorship – because it’s pubes on a bar of soap, for God’s sake – but I couldn’t find that image anywhere online. Well, it’s there now. You’re welcome.

It certainly made a statement – which was presumably entirely the point.

There are some other ads from the same campaign – though I’ve no idea whether they were used or just concepts – on the website of design group FUEL. They are not as unsavory.

The next few issues featured adverts for actual games, of all things – albeit still with the odd humorous image, like tyre tracks over a dog and a sofa for RalliSport Challenge. Got to keep the message consistent, after all.

It went quiet for a few months after that, until the December 2001 issue (E117). That issue, coincidentally, Edge ran a cover asking the question, “Operation Xbox: is it terminal?” The editorial extensively compared it to the Dreamcast. Yes, it was a tough first year for the Xbox.

Microsoft’s marketeers had a plan though: highlight the new games available in November, like… Blinx. Bleak times indeed. The Christmas issue (E118) did the same for December, wisely dropping Blinx.

Whatever happens tonight when Microsoft unveil the new Xbox, you can at least guarantee that Blinx won’t be involved. Or Blood Wake.