Is it a bird? Is it a plane? No â€“ itâ€™s a round-up of six canned superhero games.

With Injustice: Gods Among Us riding the charts high and Iron Man 3 raking in the cash at cinemas, we thought now was a pretty good time for a look back.

Considering DCâ€™s Lobo is the first extra character to be added to Injustice, Oceanâ€™s 16-bit brawler Lobo is a fine place to start. 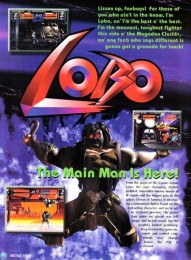 This one-on-one beat ’em up was due out in 1996, which would have made it a very late release for both the Mega Drive and SNES. It featured a rendered art-style similar to Killer Instinct and Clay Fighter but looked rather lifeless and ugly when compared to these two. Backdrops lay motionless; characters were small and crudely animated.

Review copies went out to the â€˜90s press, including Game Pro and Nintendo Power, where it received something of a mauling. Ocean, consequently, pulled the plug. Fans of Lobo did get to play it eventually however – playable versions were dumped online.

Kemco had another crack at developing a Lobo game in 2003, this time for PlayStation 2 and Xbox, but it too failed to materialise. Given how shoddy their Batman: Dark Tomorrow game was, it was likely to have been for the best.

You donâ€™t need to be a genius to realise that cancelling a videogame sets back the publisher an awful lot of money. It has been estimated though that EAâ€™s decision to cancel Pandemic Studios’ open world Batman game cost them over $100 million in lost revenue.

Batman: Dark Knight was never officially announced, which is why this might be the first time youâ€™ve heard of this tie-in. It was even seen as something as a ‘secret project’ within EA itself.

Gary Oldman let slip of the gameâ€™s development during an interview with Game Trailers where he claimed that a lot of time and effort had gone into Batmanâ€™s gliding abilities. As an open world game, ‘flying’ from one location to another would have naturally played a big part.

A couple of reasons are known for the gameâ€™s cancellation. Firstly, EAâ€™s ownership of the Batman license was due to end in December 2008 and so Pandemic was under a lot of pressure. Koktaku reported that theyâ€™d already thrown out six months of work after being told it had to tie-in with the Dark Knight, rather than an everyday Batman game. Secondly, Pandemic had decided to use their engine for The Saboteur, which wasnâ€™t designed for an open-world game. This lead to a ton of technical issues, which didnâ€™t exactly help development to come along swiftly. Shortly after The Saboteur was released, Pandemic was shuttered.

Incidentally, a prototype of a Victorian-era Batman comic book tie-in entitled Gotham by Gaslight did the rounds a couple of years ago, but failed to find interest from publishers. There’s some rather foggy footage here. 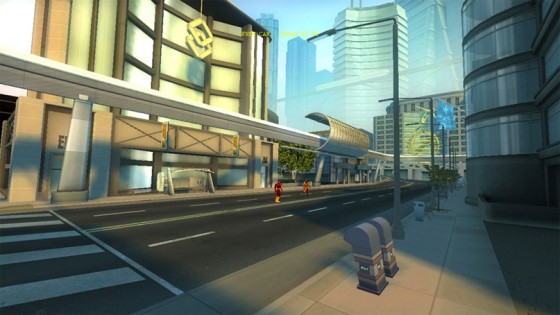 Brash Entertainment was a publisher established simply to pump out licensed videogames. Alvin and the Chipmunks, Jumper: Griffin’s Story and Space Chimps were their first three efforts, all of which scored and sold poorly. 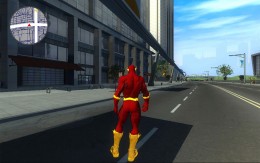 Perhaps believing that movie tie-ins shouldnâ€™t be their sole source of income, they managed to strike up a deal with DC Comics to release games based on both The Flash and Superman.

The Flash was being handled by Bottlerocket, who are best known for the last Splatterhouse game, but soon became a flash in the pan once Brash Entertainment went bust. A few of Brashâ€™s games that were in development at the time managed to find new homes, such as SAW which Konami picked up, but The Flash wasnâ€™t quite so lucky.

It wasnâ€™t long until a handful of screenshots and some footage leaked online. This clip on YouTube shows The Flash running through city streets and performing whirlwind attacks and such on groups of enemies. This would appear to be from an earlier version than the screenshots, as barely anything is textured.

And here’s Brash Enterainmentâ€™s Superman game. Factor 5 were reported to be making this one. If that name rings a bell, itâ€™ll be because theyâ€™re the studio who developed the Star Wars: Rogue Squadron games on N64 and GameCube. They also worked on Lair for PlayStation 3, but the less said about that one the better.

A short clip of concept footage and a few renders made it onto the â€˜net. There was also some character art which suggested that Superman would face Solomon Grundy, Doomsday and Lux Luthor in an exo-suit at some point.

Weâ€™re not sure why another publisher didnâ€™t step in to pick this one up. Perhaps they share our belief that Titus jinxed the brand after the release of Superman 64 because every Superman game since has either been terrible or cancelled. â€œSolve my mazeâ€ indeed.

If youâ€™re thinking “Hey, I played this!” then you’re probably thinking of Warner Bros. Games’ Justice League Heroes from 2006. This cancelled Justice League game was due in 2004, and would have been published by Midway. 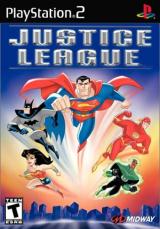 Travellerâ€™s Tales were at the helm, and the list of characters due to feature was a long and lengthy one – Green Lantern, Hawk Girl, Superman, Batman, Wonder Woman, Aquaman, The Flash and Martian Manhunter would have been present to give the bad guys a pasting. Just three evildoers were revealed in total: Orm, Mongul and Lex Luthor, but there was likely to be more. A top-down brawler like this was bound to have a boss battle at the end of each stage, after all.

The reason for the gameâ€™s cancellation isnâ€™t clear. We doubt quality had anything to do with it, seeing as Midway had a tendency to release utter garbage.

Scavenger Inc must have had a soft spot for Sega, sticking with the Saturn to release Amok and Scorcher instead of leaping ship to PlayStation. Before that duo of Saturn-exclusives however they worked on an X-Men title for 32X. 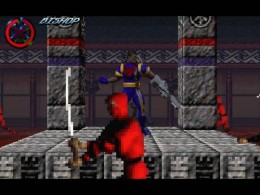 As the name loosely suggests, this 3D scrolling beat â€™em up / adventure game would have seen the X-Men enter their own minds to face their deepest fears. A pretty good idea for a superhero game, all told.

A playable beta exists in which villain Arcade transports Bishop into what appears to be a brightly coloured childâ€™s bedroom filled with evil oversized toys. The second level was slightly easier on the eyes â€“ a dojo filled with ninja and traps. Sprites were large and well animated and the 3D environments could have in no way been rendered on the Mega Drive, so it would have been a shot in the arm for the failed add-on.

The 32X did eventually receive one Marvel comic book game – terrible 2D platformer Spider-Man Web of Fire, which is now worth a tidy sum despite it’s shoddiness.