While watching the trailer for Sonyâ€™s upcoming PlayStation 3-exclusive The Puppeteer, it dawned on us that it could be the spiritual successor to Dynamite Headdy. 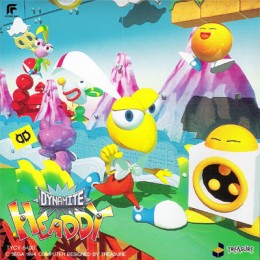 By the time the trailer ended we did perhaps think otherwise, as the differences between the two are vast, but still, any excuse to dig out Treasureâ€™s often forgotten Mega Drive platformer is a good excuse.

The bright yellow puppet made his appearance in 1994. Treasure had already made a name for themselves with Gunstar Heroes â€“ a game which showed what the Mega Drive could do when tickled in the right places â€“ but gamers were yet to be treated to the run ‘n’ gun delights of Alien Solider. We donâ€™t recall Dynamite Headdy gaining as much press attention as either of these, although it was well received at by the â€˜90s gaming magazines who did give it some coverage.

The market at the time was swamped full of colourful platformers, which is more than likely why it was overlooked. Thereâ€™s no arguing though that it was more creative than most. In fact, it has often been said that thereâ€™s more imagination in the first level alone than in other entire games. Bosses feature heavily, be it mini or fully fledged, while every level was suitably different from the last. 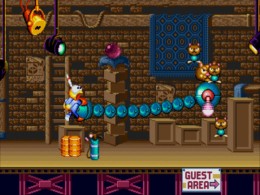 Matching Headdyâ€™s puppet ethos, the whole game was meant to be a theatre production. Backdrops were designed to look like wooden sets; occasionally they toppled over to reveal tiny little toys running around behind the scenes. Headdyâ€™s health meter meanwhile was a stage light, while the pre-level splash screens featured red curtains.

Rather than start with a tutorial, things kicked off with a fast-paced chase sequence in which Headdyâ€™s friends were being carted away by a bright red robot. Headdy managed to escape, only to bump into Heather, or â€˜Fingyâ€™ as she was known in the Japanese version. Heather was Headdyâ€™s love interest but she was no damsel in distress â€“ she even beat Headdy to one of the earlier bosses, defeating it before Headdy arrived.

Trouble Bruin was then introduced shortly after. A lot of gamers mistook this character for a cat â€“ a very easy mistake to make â€“ but he was in fact a bear. A bear assassin, no less, who had been hired by the Dark Demon to keep Headdy away from the keys required to access this evildoerâ€™s lair. True to his name, Trouble Bruin appeared in several of the boss battles, usually behind the controls of an elaborate contraption. He also appeared in the backdrops now and then, popping his head up from behind bits of scenery. 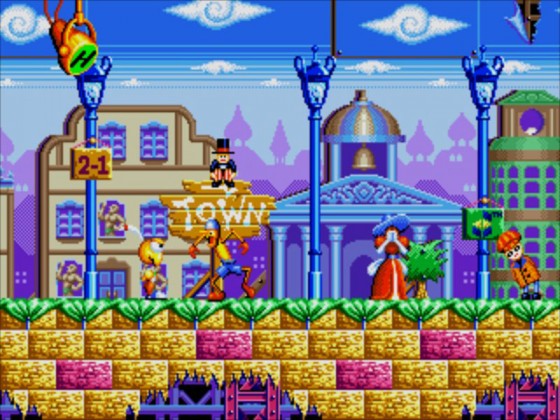 The tutorial stage didnâ€™t appear until the second level, and even then it was optional. Moreover, each tutorial offered a challenge as well as introducing the three helper characters. â€˜Headcaseâ€™ provided Headdy with a change of heads â€“ there was a significantly high amount and each gave Headdy a temporary skill. The majority of these were amusing to use, such as the vacuum head which not only sucked in all enemies on screen but any collectables too. There was also a bomb head, which would destroy everything on screen, and a hammer head that was used to move large obstacles around. 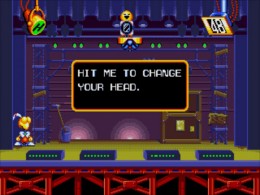 Headdyâ€™s other friends included â€˜Hang Manâ€™ â€“ an orange ball which Headdy could grab onto â€“ and â€˜Beauâ€™, who pointed out bossesâ€™ weak points while yelling â€œTarget!â€ There was also â€˜Binoâ€™ â€“ a bizarre looking character with massive ears, whoâ€™d casually stroll through the colourful levels. Hitting Bino would bag a secret bonus point. Every level had a few of these to find, usually for hitting something which didnâ€™t quite fit in, such as a wooden cow which unlike the rest didnâ€™t â€˜mooâ€™ when jumped on.

Bonus rounds featured too. These saw Headdy dress up like the Statue of Liberty in order to play a basketball mini-game. Beating the mini-game four times awarded a secret code which could be entered on a keypad at the end of the game. In the Japanese version this took Headdy into the managerâ€™s office, who after proclaiming that the show had been a big success, ordered his hired goons to attack. A bizarre ending for a bizarre game. 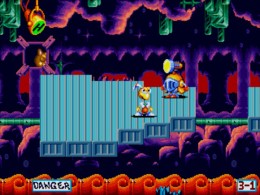 Just like Gunstar Heroes, Treasure managed to squeeze some special effects out of the Mega Drive here. The third level featured some pseudo 3D tilting platforms, while one of the boss battles took place on a circular platform that spun Headdy around from the background to foreground. A few other neat little graphic tricks appeared here and there also â€“ the first boss was a large inflatable dog which stretched in size as it bounced around, amusingly crushing Trouble Bruin in the process.

There were also a few differences between the Japanese and US versions. One mini-boss took the form of a slightly creepy doll in the Japanese version, but was changed to a robot for the US, while another boss was likewise changed from a ballerina to a robot. We assume this was to prevent any allegations of depicting violence towards women. Effort was also put into the translation – most of the level names were movie puns such as â€˜Terminate Her Tooâ€™ and â€˜Twin Freaksâ€™. 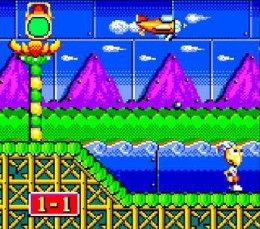 A Game Gear version exists but is hard to recommend – the systemâ€™s constraints really hampered the experience. Backdrops were motionless, Headdy wasnâ€™t particularly well animated, several power-ups were missing and a few of the enemies werenâ€™t even animated. The last boss simply stoods on the spot with his arms up in the air, as if frozen in motion. Your reward for beating him? Just a single static screen claiming that now the Dark Demon has been defeated, Headdy can go and relax with his friends. This 8-bit version was handled by the studio who went on to make the critically panned Sonic Labyrinth, so perhaps itâ€™s not much of a surprise to learn that itâ€™s a bit on the rubbish side.

Keen to experience Dynamite Headdy for yourself? Assuming you donâ€™t own a copy already, by far the easiest way to is to purchase the content-heavy Sega Mega Drive: Ultimate Collection (aka Sonic’s Ultimate Genesis Collection). This collection allows you to save your progress at any time, which is handy â€“ Dynamite Headdy is a surprisingly lengthy game, and towards the end in particular it can be quite challenging.

Indeed, it’s hard to think of another Mega Drive game, save for Treasureâ€™s own efforts, which provides a similar rollercoaster ride of boss battles and fast paced sequences. Even nowadays games featuring two or three boss battles in a row are seldom seen.

If Gunstar Heroes is Treasureâ€™s crowning achievement from the 16-bit era, then Dynamite Headdy is their biggest hidden gem. The fact that Europe never received the PlayStation 2 Treasure Box collection â€“ which contained Gunstar Heroes, Dynamite Headdy and Alien Solider â€“ always saddens us, as itâ€™s a game we feel that more people should have played.