Youâ€™d be wise not to dismiss Crash Course 2 as promotional tat. Under the colourful exterior lies a game thatâ€™s both addictive and surprisingly well designed. As freebies from Doritos go, itâ€™s easily the best thing since Star Wars Tazos.

For those who missed out on the first Crash Course, which too was a freebie, it can be loosely described as a videogame rendition of Takeshi’s Castle. Players sprint, jump, skid and bounce their way through an elaborate obstacle course full of moving platforms, springs, conveyor belts and mallets which can send your Xbox 360 avatar hurtling towards the screen. Every course has a set time to beat, along with three ‘ghost’ contestants to race against.

Developers Behaviour have added a significant amount of new content, including some rather welcome elements that encourage exploration. This makes it feel more like a typical platformer at times rather than a simplistic madcap race to the finish line.

Like before, the single-player mode is based around a world tour. A set of courses in the Amazon help to break you in gently, getting to grips with the controls and learning a few of the nuances essential to shaving precious seconds off the clock. Your avatar is precise and responsive to control – rarely do you feel that fault is anybody else’s other than your own. Should this not be the case then you can always rewind try again.

After the Amazon come courses set in the Antarctic, Egypt and finally on a pirate island. Weâ€™re not sure where in the world the pirate island is set, but weâ€™re pretty certain it isnâ€™t Cornwall. Backdrops are imaginative throughout, ranging from a colossal boss-eyed squid wearing yellow rubber gloves to a giant effigy of Egyptian God Anubis, whoâ€™s rather randomly rocking out on a guitar. 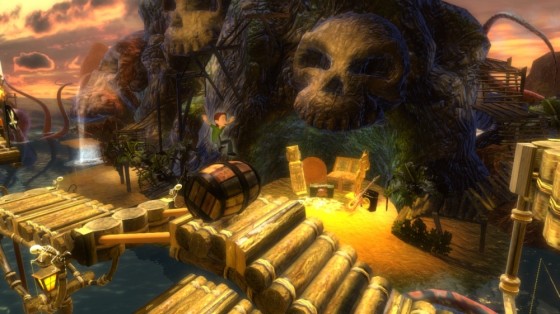 As youâ€™d expect the courses become increasingly tricky, adding new obstacles along the way. At first only one course is available â€“ the rest have to be unlocked by spending stars, which are placed haphazardly in the courses. This is where the platform elements come in – a few of have to be backtracked to reach, while others are in locations that initially make you think â€œHow the hell do I reach that?”

There are sixteen to find and unlock on each course which gives Crash Course 2 a surprising amount of replay value. A few of these canâ€™t be gained until you unlock an extra path through the course, which adds further reason to return.

Then there are the challenges to take into account. Each course has three of these, varying from completing a course without grabbing ledges to performing ten slide jumps inside checkpoints. Beating these challenges awards two or sometimes three extra stars.

The design of the courses is impressively devious in places. One has a set of trampolines towards the end that have to be avoided; hit the very last one and itâ€™ll send you bouncing off the rest and back to the beginning of the section again. Sometimes when falling off a platform thereâ€™s also a chance to quickly double jump your way back to safety off the platformâ€™s supports. The first time we did this we grinned like a goon as we thought we were a goner for sure.

There is one slightly unwelcome new addition though – optional micro-transactions. Avatar costumes, temporary power ups and items that can be used to â€˜jinxâ€™ other players when competing online can be purchased using valuable stars or medals. Extra stars can be purchased starting from 80 MSP for ten to a whooping 1,600 MSP for 200. You do however unlock a few of these extras as you hit certain milestones so never did we feel that we were missing out.

If people want to spend real money buying a toilet to put on their avatarâ€™s head, then so be it. We arenâ€™t ones to judge.

Online play sees you and three others compete. As mentioned earlier, items can be purchased beforehand to â€˜jinxâ€™ other players. With a press of a button they can be turned into chickens, pigs, babies and more, simply for your own amusement.

Knowing the courses inside out gives a serious advantage over the competition â€“ finishing way before the rest of the pack can be quite satisfying. Weâ€™d suggest playing with friends rather than randoms – we quickly noticed that a lot of players quit when the going gets tough, which is rather unsportsmanlike. If your friends are the competitive sort then thereâ€™s no doubting that thereâ€™s potential for some very heated battles online.

For a freebie Crash Course 2 is a rather comprehensive package with a surprising amount of content. Aim to collect every star and go for gold on each course and itâ€™ll serve you well â€“ thereâ€™s a fair few eveningâ€™s worth of entertainment to be had, with additional courses promised for the future. Now if youâ€™ll excuse us, weâ€™re off to buy a bag of Wotsits.