The saying â€œgood things come to those who waitâ€ rings true with Persona 4 Arena. It was originally due last August, but then delayed time and time again. PlayStation 3 owners couldnâ€™t even resort to importing a US or Japanese copy â€“ it was one the few PS3 games to be region locked.

Those who have played any of the numerous Guilty Gear or Blazblue games will feel a sense of familiarity â€“ itâ€™s by the same developer and shares a similar art direction.

The story carries on from where Persona 4 Golden left off and each of the 13 characters having their own campaign. The press release boasts that itâ€™ll take 30+ hours to see the story in full, which strikes us as quite a significant amount for a one-on-one brawler.

Reviews have been full of praise, including 9/10 from Destructoid, 9.0 from IGN and 9/0 from Eurogamer. Looking at Metacritic, thereâ€™s not one review below 80% and thatâ€™s from a round-up of 27 critic reviews. You have to admit that is rather impressive. 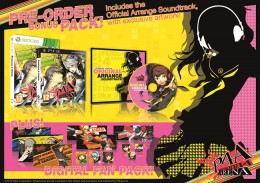 Two limited editions are available. Currently the rather lavish exclusive set on The Zen Store is still in stock and includes a tote bag, badges, keyring, jigsaw puzzle and more for a not too shabby Â£49.99. GAMEâ€™s pre-order pack meanwhile includes a soundtrack CD and digital fan pack for Â£34.99. They were offering a yellow vinyl record with it at one point too but that deal appears to have ended.

Persona 4 Arena went down very well in Japan â€“ even beating the launch figures of Tekken 6 â€“ and with only two other games out this week, weâ€™re hoping itâ€™ll do well in next weekâ€™s UK chart.

Those other games? A retail release of Telltaleâ€™s The Walking Dead series and Mystery Murders: Jack the Ripper on 3DS.

We reviewed all five parts of The Walking Dead and enjoyed them a great deal â€“ Episode One had us gripped from the start, and then things kept getting better as Telltale developed each character further and slowly introduced new ones.

Mystery Murders: Jack the Ripper meanwhile is yet another hidden object game. The product description on the Nintendo website doesnâ€™t fill us with much confidence.

Doritos Crash Course 2 also smashes onto XBLA this week. Just like the first one, itâ€™s a free download. It has been developed by Behaviour Interactive, who worked on the better than expected Rango and Disneyâ€™s Brave tie-ins, not to mention the likes of Naughty Bear and WET when they were known as A2M. After working on so many kidâ€™s games, we suppose that name had to change sooner or later.

Monaco: Whatâ€™s Yours Is Mine is due out on XBLA this Friday too, after a minor delay. 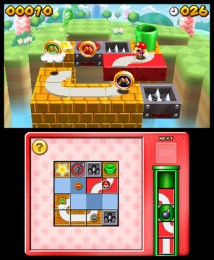 Bloody Vampire has been likened to Castlevania, only with a much brighter colour palette, while Mario and Donkey Kong: Minis on the Move is an against-the-clock puzzler with bonus mini-games. Thereâ€™s a video on Nintendoâ€™s site here.

Crash City Mayhem – aka Runabout 3D: Drive Impossible â€“ on the other hand is also due out at retail, hence why itâ€™s Â£17.99. We took a look back at the Runabout series yesterday, if you missed it.

Then there are the Virtual Console releases – Wrecking Crew smashes onto 3DS eShop for Â£3.59, while Xevious and Solomonâ€™s Key arrive on Wii U for Â£3.49 each. Even the Wii gets a slice of retro action this week – World Heroes 2 Jet for 900 Nintendo Points.

EAâ€™s FUSE demo finishes the week off, now available on both Xbox Live and PSN. This is the first multi-format game from Resistance and Ratchet & Clank developers Insomniac, if you weren’t aware. EA seems to be giving it more promotion than some of their other recent games, which is always a good sign. They have an irritating habit of not promoting the titles that need it the most.