Is this the endless runner to end all endless runners? Of course it isnâ€™t. If such a thing existed then a rip in the space-time continuum would occur, causing earthâ€™s seas to boil and the ground to crumble beneath our very feet.

Weâ€™d wager that the world would be left looking a little like Robot Unicorn Attack 2â€™s backdrops, in fact. The art-direction has seemingly been influenced by ’80s fantasy, complete with floating islands, giant crystal formations and more rainbows and waterfalls than we could count. This does give it quite a bit of appeal as it really is a treat for the eyes.

And thankfully so, because originality isnâ€™t exactly Robot Unicorn Attack 2â€™s forte. Like other endless runners before it itâ€™s a case of skilfully jumping, dashing, collecting items and occasionally smashing through obstacles. Crystals, in this case.

Three wishes (read: lives) are at your disposal, with extra bonus skills and such added by rising up the ranks. The level design is fixed rather than randomised, which goes against the grain of other endless runners, but at least this does give a chance to learn the layout and where the multiple paths take you. This also means that from thereon in death or success is in your own hands, rather than a result of the randomised design. 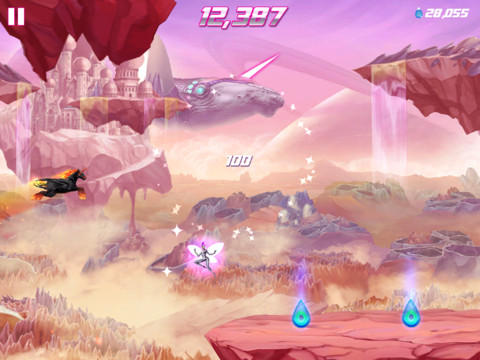 If we look past the colourful exterior, we find that the real beauty lies in its execution. The jumping mechanism feels exactly how it should, allowing you to jump, double jump or even double jump and dash with both grace and ease. It may offer a clichÃ©d ride, but boy is it a smooth one.

Itâ€™s a pleasingly polished package too, with a sense of humour and a few nice touches. You can also rest assured that you wonâ€™t be seeing everything within a couple of lunch breaks: the store and customisation options donâ€™t open up until rank 5 is reached, which takes around 40 minutes or so; on levelling up to rank 6, online play becomes available.

Here you can choose to back Team Rainbow or Team Inferno, and earn extra unicorn tears which are used to upgrade your unicorn. Alternatively, if youâ€™ve saved up enough you can do away with it and ride across the pastel-coloured landscapes on an ‘Iron Pegasus’ if you wish. A problem we discovered here is that way more people back Team Inferno, and so theyâ€™re always the dead cert to join online. Unless weâ€™re mistaken thereâ€™s no way to change teams after making the initial decision.

When rank 15 is eventually reached a new ice level opens up. Those who are impatient can shell out to play it earlier, if desire calls. Incidentally, the first Robot Unicorn Attack was a paid app and featured a licensed soundtrack. In order to release this sequel as a free download developers PikPok have had to remove the likes of Erasureâ€™s ‘Always’ and add them as optional purchases costing 69p a pop. The artists receive a cut of the profits, and thereâ€™s the chance to preview tracks before buying. 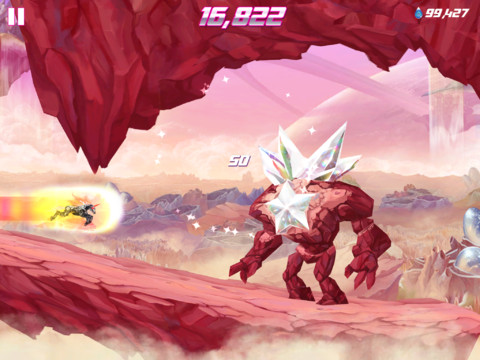 Personally we didnâ€™t feel the need to bolster the playlist â€“ the main theme is utterly charming. This is one of the few mobile games we turn the volume up especially for. Not in public, mind you, because we know first-hand how much that annoys people.

Robot Unicorn Attack 2 may not provide anything amazingly new, but even so its whimsical nature caused us to develop something of a soft spot for it. Give it a download and see if the metal steed can have the same effect on you.