Iâ€™m sure weâ€™re all guilty of popping into town or having a casual browse online only to end up putting a game in a shopping basket, virtual or otherwise, on a whim.

For men especially this could be linked back to our cavemen genes â€“ we are supposed to be good providers, after all. Eat up that Â£5 game from Asda, son.

every game will drop to Â£10 eventually

My â€˜unplayed pileâ€™ is starting to become more like a pile of shame, taunting me every time I look at it.

The number of lengthy RPGs it contains in particular is worrying â€“ Risen 2, Gothic 4, Of Orcs and Men, Game of Thrones and more, all purchased for that magic impulse buy Â£10 mark. Currently Iâ€™m playing through Fallout: New Vegas and making good progress, so there is at least intention to play them all eventually.

Today though, I will try my best to prevent anybody else taking the same path of hoarding games instead of actually playing them. My unplayed pile can be used as example here. 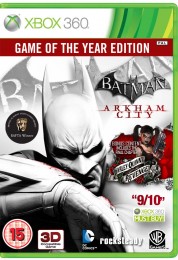 Shortly after the gameâ€™s release, Blockbusters dropped the price of Batman: Arkham City to Â£13.99. Most online retailers at the time were selling it for around the Â£20 mark so it was quite the bargain. A copy was purchased, and now sits on my shelf, gathering dust.

Like every game I buy, it will see my 360â€™s disk tray one day but other distractions keep popping up. Batman Arkham City: GOTY Edition can now be purchased for around Â£12 online, making the Â£13.99 I blew on my copy not quite the bargain it once was. This leads me onto my first reason: games drop in price stupidly quickly.

And also the second: most big name games receive â€˜Game of the Yearâ€™ editions nowadays.

One piece of advice I keep in mind when tempted to open my wallet is that every game will drop to Â£10 eventually. This wonâ€™t prevent you from hoarding, but it wonâ€™t harm your bank account as much.

Then after enjoying EAâ€™s console version of The Sims 3 â€“ or at least for a dozen or so evenings â€“ The Sims 3: Pets was bought after seeing it fall to Â£8.99 or thereabouts. The intention was to play it straight after ‘finishing’ The Sims 3, but after deciding that playing something slightly different may be a good idea, it then fell to the bottom of the pile. As time passed it was eventually announced that EA were shutting down the servers. There donâ€™t appear to be any achievements linked to sharing stuff or playing online, but when servers for other games have been shut off in the past this has been the case.

This ties in with the fact that some DLC has a redemption date. The last game that springs to mind is THQâ€™s Warhammer: Space Marine. Luckily I spotted that I only had a month or so to unlock some exclusive armour (or such) and did so.

Lastly, and perhaps most importantly, the next generation of consoles will be here sooner than you think. Before purchasing an Xbox 360, the PlayStation 2 was my most used console. I planned to play it just as much as I did before, but the likes of Oblivion, Dead Rising and to an extent Kameo made it very hard to go back. HD was the future, even if I couldnâ€™t read Dead Risingâ€™s text on the CRT TV that I then owned.

My fingers are crossed that the next Xbox has some form of backwards compatibility, as Iâ€™m sure many other peopleâ€™s are.