Comparing Riptide to the first Dead Island is like comparing Fallout: New Vegas to Fallout 3. Itâ€™s more of a glorified expansion than a proper sequel, retaining the look and feel of its predecessor due to some incredibly heavy asset recycling. The problem here is that Dead Island wasnâ€™t much cop to begin with.

Reusing Dead Islandâ€™s engine means that once again weâ€™re treated to a game with zombies that appear to be made out of clay, ugly NPCs resembling store mannequins and the occasional melee weapon that looks like itâ€™s made out of plastic rather than metal.

A few improvements have been made here and there, but theyâ€™re incredibly minor. Weâ€™re talking about things like new water effects and tidier looking menus. Although these are admittedly alluring â€“ at least in the case of the water effects – they donâ€™t mange to compensate for how dated everything else looks.

The sense of familiarity doesnâ€™t end there. Even though set on a different island, Riptide is full of similar sights â€“ ruined holiday resorts, shanty towns and abandoned military bases. The storyline isnâ€™t vastly different either, with a very similar opening in particular. Just like the original, the first few hours see you setting up a secure area for a group of fellow survivors before heading into an evacuated city to find a way off the island.

Then thereâ€™s the return of the fetch quests. Those, terrible, terrible fetch quests. After being sent into the city for the umpteenth time to find a ridiculously insignificant item we soon stopped accepting sub-missions, no matter what the rewards were. 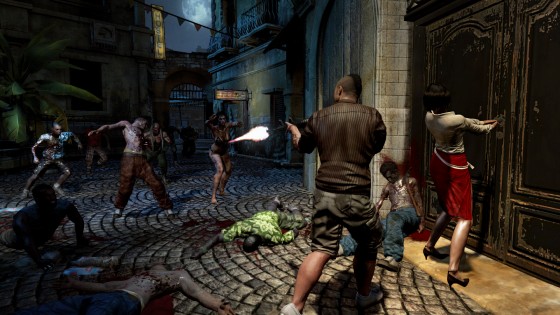 The four original characters return, along with newcomer John. Heâ€™s an expert with melee attacks and fits in with the other characters superbly. Thatâ€™s to say heâ€™s just as arrogant and despicable. The inability to design characters you care about is one of Techlandâ€™s biggest downfalls. If you played the original then thereâ€™s the chance to import an existing character. You donâ€™t get to keep hold of any weapons or items, but you do retain perks and experience.

Boats are one of the few new inclusions. We suggest getting your fill of power boating around the flooded parts of the island early as theyâ€™re only available during the first part of the story. Itâ€™s a bit of a shame as thereâ€™s some fun to be had by churning up the new â€˜drownerâ€™ zombies with the boatâ€™s motor. Incidentally, if there are any differences between the ‘drowners’ and the common or garden variety zombies – other than the sea-weed – then we failed to spot them. This is a good example of Techlandâ€™s level of creativity, sadly.

Itâ€™s not all bad though. Base defence missions are another new addition and itâ€™s during these chaotic zombie onslaughts that Riptide shines as bright as its sun-drenched locations. Before your base is hit by wave after wave of the undead thereâ€™s a chance to strategically erect fences, set mines and in one instance place mini-guns.

As the story progresses the survivors find themselves in a surprisingly high number of temporary safe houses, which adds a bit of variety to the proceedings, and each of these has a defence mission at some point. Our favourite of these has to be set in a quaint cinema which has been left relatively unscathed from the carnage on the streets.

Other good points? In amidst the poor dialogue, embarrassingly awful cut-scenes the frustratingly melee-heavy combat there are a few more. The ability to make weapons out of scrap is somewhat pleasing, while playing co-operatively makes the mundane mission objectives slightly less mind numbing.

If you can put up with how incoherent the storyline is and how the uninspired quests are then there is a lot of bang for your buck. Weâ€™d clocked a not too shabby 13 hours before the ending credits rolled, and that was without finding a lot of the collectables.

As sequels go though, Dead Island Riptide is the worst kind – one that doesnâ€™t fix the faults of its predecessor or add any significantly new features. Had there only been a year between Riptide and the first Dead Island we could understand why so many assets have been recycled, but Techland has had two years (or thereabouts) to get Riptide shipshape. Weâ€™re pretty sure even some of the music has been lazily reused.

There has been some effort at improvement here and there â€“ whereas the first Dead Island was poor, better pacing and a larger variety of locations elevates Riptide to the realms of mediocrity â€“ but for the most part itâ€™s a case of more of the same. The fact that the achievement for finishing it is called â€˜Youâ€™ve tricked me onceâ€™ is most ironic.