Flaming Nora – Fire Emblem: Awakening on 3DS has been on the receiving end of some incredibly high review scores. The Metacritic currently stands at an impressive 91% from 31 critics, and not one of those reviews is below 80%.

Eurogamer and Pocket Gamer both handed out 10/10s for the turn-based strategy game, while EDGE gave it 9/10.

â€œThis is a special game. The kind that makes you stop and think for a long time about whether it’s ever been done better. You couldn’t call Awakening philosophical, but it has things to say about friendship, loyalty, in its own small way love, and a climax that brings these themes together with masterful elegance,â€ said Eurogamer. 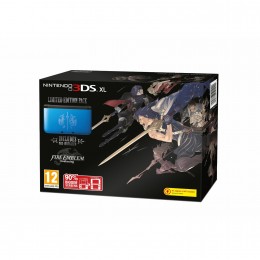 Worth buying a 3DS for? Nintendo hopes thatâ€™s the case â€“ a limited 3DS XL bundle is being released this Friday, complete with a fetching blue motif on the handheld. The game itself comes pre-installed, which seems to be the norm for handheld bundles these days. Both Amazon and GAME are selling it for Â£189.99.

GAME, incidentally, are currently selling the 3DS XL with either Mario Kart 7 or Mario 3D Land for Â£159.99 which seems a pretty good deal.

DC beatâ€™em up Injustice: Gods Among Us is the only other notable release this week. Thatâ€™s unless you count Puzzler Brain Games on DS/3DS as being notable, anyway.

US reviews of this one-on-one brawler have been very positive, including even a few 9/10s such as these from The Official Xbox Magazine, GameInformer and a 9.5 from EGM. Reviews from UK sites have been slightly less positive, but still good, like 7/10s from both GameSpot and GameCentral.

This shouldn’t have been a surprise â€“ in the past, Mortal Kombat games have always gone down a storm in the US, but have been met with mostly solid 7s from European reviewers. Different regional tastes, we suppose.

GameCentral notes that itâ€™s a decent fighting game for beginners, with an excellent training system and hilarious super moves but the combat is nowhere near as technical or nuanced as other 2D fighters.

Planning on buying the Wii U version? Bad news â€“ it has been put back a week. Weâ€™re not sure why but itâ€™s a bit a blow, especially seeing that the Wii U version isnâ€™t getting the special edition treatment either.

Deep Silverâ€™s Sacred Citadel is this weekâ€™s only XBLA release. Itâ€™s a 2D hack and slash thatâ€™s designed to act as a prologue to Sacred 3. The press release claims that itâ€™ll set the new standard for side-scrolling brawlers. It does look quite fetching going by the screenshots, weâ€™ll give them that. Itâ€™s also due out on PSN at some point.

Journey Collectorâ€™s Edition for Â£15.99 is this weekâ€™s PSN highlight. As well as the celebrated Journey it also contains Flower and flow, along with soundtracks, themes, developer diaries and more for all three. If this sounds like something youâ€™d like to own a physical copy of, then worry not â€“ itâ€™s being released at retail later this year.

Call of Duty: Black Ops II, Dishonored and Forza Horizon have received significant add-ons this week too. Forza Horizon 1000 Club Expansion Pack costs nothing to download and includes 100 new challenges and extra cars. There are ten new achievements to unlock as well. Dishonored Knife of Dunwall is the second add-on for Dishonored, but unlike the first â€“ which was merely a set of new trials â€“ this one is a new standalone mission. Youâ€™re cast into the role of Daud, the assassin who murdered the Empress at the beginning of the main game, as he sets out on a journey of redemption. 800 MSP, or Â£7.99 on PSN, if your interest is piqued.

The Call of Duty: Black Ops 2 Uprising DLC meanwhile weighs 1.73GB and carries a price tag of 1200 MSP. It features four new multiplayer maps (Magma, Encore, Vertigo and Studio) as well as new zombie mode Mob of the Dead, complete with a brand new map, Alcatraz. Celebrities Chazz Palminteri, Joey Pantoliano, Michael Madsen and Ray Liotta have been called in to supply the voice work for that one. Whether Activision paid them with bootleg rum and counterfeit cigars is yet to be revealed.