With Bioshock Infinite still setting tongues waggling nearly a month on from launch, we thought weâ€™d base this monthâ€™s eBay round-up on the sterling shooter series. 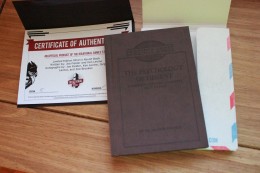 Leading the way is this autographed 48 page hardback â€˜Mind in Revoltâ€™ book, which was #13 of just 15 signed copies. Another 40 copies were made but not autographed, the seller notes. The book, which came with a certificate from Irrational, provides insight into the mysterious sky-city of Columbia prior to the events of the game. How much did it sell for? You may need to sit down for this â€“ a whopping $5,555.00, attracting 69 bids. 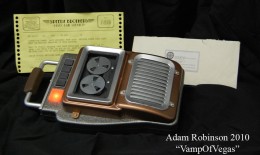 Rarer still was this replica audio diary from Bioshock 2, of which only 4 exist. These were released as part of a viral campaign. The seller managed to acquire it by following leads, which eventually led to a puzzle. Then one day, while washing his car, somebody dressed in Bioshock cosplay arrived on his doorstep with a telegraph with a code to decipher and an instruction to meet at a storage location. The prize was, as you may have guessed, this replica audio diary. The seller was kind enough to upload a YouTube video of the device working â€“ itâ€™s a very nice item indeed, so itâ€™s no surprise that it sold for just over $3,000.

Another item managed to sell for a similar amount â€“ a replica â€˜Murder of Crowsâ€™ Vigor bottle for $1,325. Standing at 10 inches tall, the seller reports that 400 were made as promotional models and sold out long before Bioshock Infinite was released. An â€œunknownâ€ liquid is contained inside, which gives it an authentic â€œbottle feelâ€ claims the seller. The fact that it also had four signatures on the base, including Ken Levine, must have also helped it to sell for such a high amount.

The promo items donâ€™t end there. Selling for just shy of $1,000 was this press kit for the original Bioshock. The owner didnâ€™t provide a great deal of information in the auction description, but it would appear to contain a vinyl record, a fake syringe (possibly a pen) and the steelbook edition of the game. The fact that the cardboard box itâ€™s enclosed in has â€œdamaged by seawaterâ€ stamped on it is a pleasing little touch.

A 17â€ lithograph now. Again, this was a promotional item that was signed by Ken Levine and came with a certificate of authenticity. 100 were made but the seller wished not to reveal the number of this item. It appears to show concept art of Bioshock Infiniteâ€™s broadwalk, including a colour palate key. It sold for $250.00, after 18 bids.

Selling for slightly more was this Bioshock Infinite press kit, which was handed out during the gameâ€™s midnight launch in Los Angeles. It ended at $464.90 after 40 bids and contained a poster and a copy of the game signed by the voice actress for Elizabeth and the voice actor for Father Comstock. These signatures were written on alternative box art, which could be used for either the PC or Xbox 360 version. A nice little bundle, there. 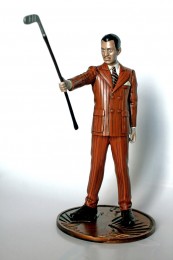 Also pleasing is this Andrew Ryan statue â€“ number #17 of 200. â€œWould you kindly bid with confidence?â€ the seller asked. Over 50 bids were placed in total, resulting in the statue selling for $703.

Lastly, thereâ€™s this inflatable zeppelin â€“ another promo item. A Spanish seller is currently auctioning off this one, which at the time of typing is at â‚¬51 with 3 days still to go.

It looks like it’ll easily fit through the buyer’s letterbox when deflated, so thereâ€™s no fear of whoever buys it having a dreaded â€˜red cardâ€™ shoved through their door.