Sometimes a game will be hit with delays, yet when itâ€™s eventually in the hands of those who have been waiting patiently, itâ€™s very hard to tell where that extra development time has been spent. A good example is Aliens: Colonial Marines – if we had to guess what the developers got up to during the five years between announcement and released, we’d wager that it was thinking up Borderlands 2’s witty ‘one liners’. 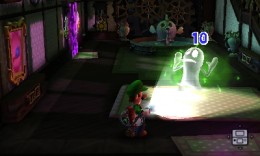 Within mere minutes of starting Luigiâ€™s Mansion 2, though, itâ€™s easy to tell that every minute of the gameâ€™s extended development has been spent wisely. It looks superb; Luigi is well animated and a delight to control. The use of 3D is impressive too, while the (optional) gyro-controls are subtly implemented. To use a phrase thatâ€™s apt given the ghoulies Luigi is up against: it simply oozes quality.

As launch games go, the original Luigiâ€™s Mansion was one of the better ones. The lighting and transparency effects showed off what the GameCube could do, while sucking up ghosts with Luigiâ€™s trusty Poltergust 3000 helped acquaint players with the second analogue stick. Or at least, acquaint those who had never picked up a Dual Shock controller. There was one major downfall though â€“ it could be beaten in around six hours.

Length must have been on the first thing on the list to rectify with this sequel, as this time round itâ€™s a much longer lasting experience. Our final save stood at just over a slightly spooky 13 hours. We didnâ€™t find even half of the hidden gems or other collectables on our first play through either.

One thing that hasnâ€™t changed is that vacuuming up ghosts remains an inviting play mechanic. Stunning a ghost with the flashlight, then reeling them in while they haplessly try to escape the Poltergustâ€™s pull is somewhat satisfying. Moreover, thereâ€™s a degree of skill involved. Bagging a ghost at the right time will result in a few gold pieces being thrown Luigiâ€™s way; netting multiple ghosts at once will yield an even bigger reward.

Ghosts come in all shapes and sizes. â€˜Greeniesâ€™ are the most common, but come clutching different weapons and attire that must be removed first. â€˜Hidersâ€™ stash themselves away, resulting an impromptu game of hide and seek, while â€˜slammersâ€™ and â€˜creepersâ€™ can put up a good fight in number. Some ghost attacks can take away a quarter of Luigiâ€™s health in one hit, but there are health tokens hidden in almost every room. 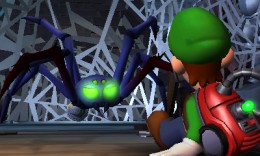 A lot of thought has clearly gone into the boss battles too. A few in particular we wonâ€™t be forgetting in a hurry, and theyâ€™re significantly different from one another. Working out their weak spots can take some experimentation, and as such we wouldnâ€™t be surprised if younger players find themselves perplexed on a few occasions. A heads up there, if you’re thinking this’ll be ideal for somebody new to gaming. This goes for some of the puzzles as well. We arenâ€™t ashamed to admit that one of the more elaborate ones, involving jumping through portals spread out over a whole mansion, took us almost an hour to figure out.

Luigiâ€™s quest to find five pieces of a magic moon-shaped crystal takes him to five different mansions in total. Well, not all are mansions per se â€“ one is an abandoned mine while another is a disused factory. Each location offers new things to play around with. The mine is set in a snowy mountain, so there are lots of puzzles involving fire and ice, while the factory has a focus on using motors and machinery. Early on Luigi even has the chance to do some actual plumbing â€“ the second mansion has faulty waterworks that require some handiwork. 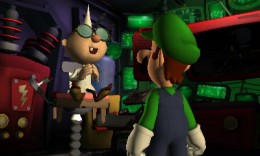 As before Luigi is under the watchful eye of Professor E. Gadd. The ageing genius is holed up in a bunker and watches Luigi via the video cameras, giving tips via Luigiâ€™s â€˜Dual Screamâ€™ handheld. At one point he even confesses to grabbing a bowl of popcorn while watching Luigi face impending terror. Dialogue between the two is amusing (â€œWhy the long face, Luigi?â€) although we did start to tire of the sight of the bunker towards the end as it’s here that the majority of the cut-scenes are set.

Cut-scenes are frequent and sadly you do get the impression that this is to pad things out. A few mission objectives feel like padding also, especially the two quests that involve chasing ghostly mutt Poulterpup around almost every room in the mansion until heâ€™s finally caught. 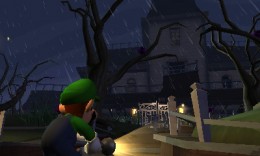 Another downer is that if Luigi snuffs it, then the entire mission has to be started again. One mid-level boss was giving us a pasting, resulting in having to restart and reach them again â€“ a task that took ten minutes each time. Itâ€™s a very dated concept that we didnâ€™t expect to find in this day and age of sensibly paced checkpoints and instant restarts. In the gameâ€™s defence there is a way around this â€“ gold bones can found thatâ€™ll summon Poulterpup to Luigiâ€™s rescue. Only once per mission, mind.

At least each mission has been designed for â€˜on the goâ€™ gaming. There are a few exceptions, like Luigi’s lengthier quests to find puzzles pieces hidden in numerous locations, but we found that generally most take around quarter of an hour. How quickly a mission is completed will affect your ranking at the end of each stage, as will damage taken and gold acquired. Gold, incidentally, will help to improve the Poltergust and the battery on Luigiâ€™s torch. 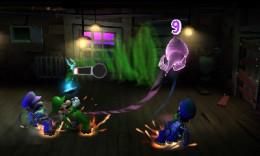 The online mode, Thrill Tower (which is known as ScareScraper in the US version, oddly), helps the package to feel complete. In fact, it didnâ€™t really need an online mode to do so, as there would have been enough reasons to return even without. Itâ€™s a nice little extra, in fewer words.

Here, yourself and three other Luigis of different hues make their way up a tall tower one floor at a time. Itâ€™s a co-operative affair â€“ players must work together to find keys and other objects, against a tight time limit. The d-pad is used to issue simple pre-written commands, thus allowing gamers from all over the world to play together. Thereâ€™s a lot more to it than we expected, including bonus â€˜red coin huntâ€™ rounds that provide temporary power-ups if successful.

Worry not if your 3DS owning friends donâ€™t own a copy â€“ local play allows others to partake via a download. The desire to reach the top floor proved to be quite addictive, and considering there’s a surprisingly large number of people playing online at present we can’t be alone in thinking this either.

Sometimes Nintendo takes flack for trusting western developers with their prestigious characters, but here their trust in Canada-based Next Level Games has been well placed. When the ending credits rolled there was no disputing that this is easily one of the best games the 3DS has to offer, even with some blatant padding here and there.