This superhero brawler has a shorter tutorial than most. How short you ask? It lasts all of twenty seconds, give or take.

Tapping anywhere on the screen performs attacks, while holding both fingers down blocks. After enough damage has been dealt a special attack can be pulled off via an icon at the bottom of the screen. Thatâ€™s pretty much all there is to it. Even character movement is handled automatically.

Three-on-three battles are whatâ€™s on offer. Characters can be swapped at any time but there are no tag-team attacks or such as seen in other recent fighting games. Unlike the console version of Injustice, for which this servers as a primer, the backgrounds canâ€™t be interacted with either.

There is though a trading card system in place, which unlocks new moves and improves existing ones. Coins are earned through battle, that can improve skills – and despite being a â€˜freemimumâ€™ game you usually accumulate enough to improve an attack after every three or four battles. Cross-platform rewards for the console version â€“ such as unlockable skins â€“ are a very welcome touch also. 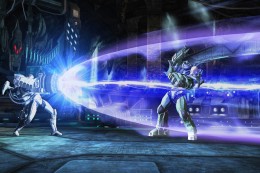 At the start just three characters are available. The Flash is the good all-rounder, and as such we found ourselves using him the most. Lex Luthor comes equipped in a metal exo-skeleton, so unsurprisingly his attacks are slow but powerful. Nightwing meanwhile can stun enemies using his electric batons. Catwoman is added to the roster shortly after, and as youâ€™d expect is a nimble contestant.

Superman and Batman are both present, but arenâ€™t unlocked until much later on – by which we mean after around a couple of hours of screen-tapping shenanigans. Until then youâ€™ll have to make do with the likes of the aforementioned and Solomon Grundy, Green Arrow, Harley Quinn, Cyborg, The Green Lanternâ€™s arch nemesis Sinestro and Hal himself.

There are a surprisingly high number of battles to play through. However, varied they are not â€“ one battle even saw us fighting The Flash twice in a row. 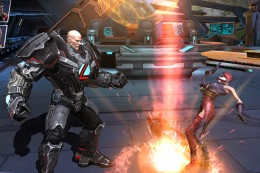 A lack of character movement (superheroes can’t jump now?) and the inability to perform special moves manually does make fighting a little repetitive, but there are still a few tactics to learn. Putting a slow character up against a fast one isnâ€™t very wise. Itâ€™s also good practice to use special moves sooner rather than later as the oppositionâ€™s â€˜power drainâ€™ moves can set your power gauge back to zero. Learning to swap characters before their health is depleted is another, although we’d like to hope that in most people’s eyes that’s common sense rather than a tactic.

Despite its shortcomings, Injustice: Gods Among Us isnâ€™t a bad little time-waster. The trading card system helps to hold the package together and it’s surprisingly decent looking – some of the more powerful special moves are mighty impressive, such as Lex Luthor activating a satellite-guided laser onto your position.

As a means of promoting the upcoming console version it more than serves its purpose.