Itâ€™s impossible to deny that Irrational Games knows how to make an entrance. Bioshock Infiniteâ€™s opening is the type that the majority of games fail to deliver, setting the scene and drawing you in almost instantly.

First setting foot in the sky-high city of Columbia isn’t going to be forgotten any time soon, and if you arenâ€™t hooked after the first ten minutes then you need to lower your standards, because right now this is as good as gaming gets.

Unlike the underwater city of Rapture, Columbia isnâ€™t in a state of despair. Itâ€™s an idyllic early 1900s city designed for rich folk with strong beliefs â€“ a religious theme is predominant throughout due to the city being under the watchful eye of Father Comstock, the antagonist despite his religious nature. Using the cityâ€™s speaker systems he warns his citizens of danger and should something go awry in Columbia he’s always the first to know.

confident enough not to treat the player like a simpleton

This is where protagonist Booker Dewitt comes in. Booker has been sent to Columbia with a mission â€“ to free Elizabeth, a girl who has spent the majority of her life in confinement. Heâ€™s a rough type, experienced in undertaking potentially dangerous missions, but that doesnâ€™t make the task at hand any easier.

Booker Dewittâ€™s arrival in Columbia doesnâ€™t exactly go unnoticed by Comstock, especially after causing bloodshed during what should have been a quaint village raffle. This makes escaping the city with Elizabeth something of a herculean task. Elizabeth isnâ€™t your typical girl either. Sheâ€™s able to cast visions – or tears as theyâ€™re known – and interact with them. As the story unfolds her backstory is explained in full. 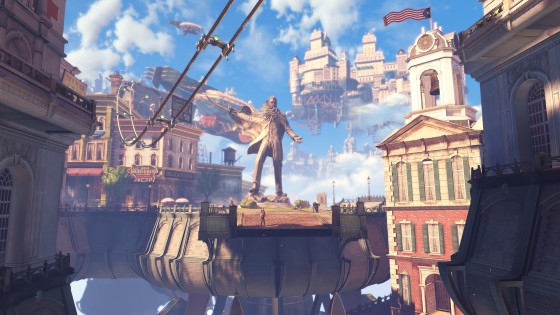 Thereâ€™s one word that sums up Bioshock Infinite perfectly, and that word is â€˜confidentâ€™. For starters, itâ€™s confident enough not to treat the player like a simpleton. Thereâ€™s very little hand-holding, although you can request an arrow to direct you to the next objective should you ever become lost. Itâ€™s also confident enough to blend some race issues into the opening storyline, which it does admirably well.

Elizabethâ€™s AI is another thing thatâ€™s handled well. Superbly, in fact. She is helpful rather than a hindrance, and whereas most AI characters lag behind she can often be found running in front, eager to discover what lies ahead. She asks thought-provoking questions and often gives her own educated views as to whatâ€™s going on at the time.

After spending life in captivity the world of Columbia is entirely new to her; she marvels at the sights – and what marvellous sights they are. Each location is as striking and memorable as the last, with our personal highlight being a synthetic beach. The environments have been designed with exploration in mind â€“ thereâ€™s always something to distract, be it a shop in the background that can be rummaged around in, or an optional side-mission to undertake. Collectable items help to expand the backstory including Comstockâ€™s rise to power and Columbiaâ€™s creation.

Elizabeth doesnâ€™t point out where these hidden collectables are but will point out items you may have missed, including valuable lock picks that she can use, and will also offer any loose change she’s found. During battle sheâ€™s more helpful still â€“ sheâ€™ll throw over ammo and health packs when both are becoming depleted along with vials of salts.

Salts are used to power Vigors â€“ destructive abilities that are drip-fed into your arsenal. In Bioshock 1 and 2 there was a strong focus on the ability to fling fireballs from fingertips and call forth swarms of angry bees but these skills now take a back seat somewhat. Instead, thereâ€™s a stronger focus on shooting – guns are bountiful in number and there are plenty of enemies to fire them at. This is the only thing that suggests Bioshock Infinite has been tailored for a slightly different audience than before. 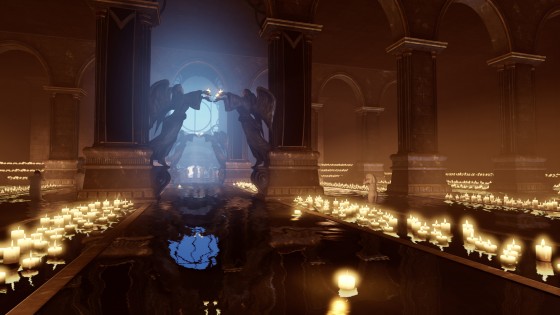 The Vigors arenâ€™t an identical assortment to Bioshockâ€™s plasmids but there are some similarities. For example, the swarms of bees have been replaced with a murder of crows thatâ€™ll peck at the hapless enemies. It’s a different skill but the effect is the same. Traps can still be placed on the ground – useful for harming groups of enemies.

A few of the Vigors weren’t particularly useful but discovering what was going to be added to our arsenal next did help to keep interest levels up. Theyâ€™re also fun to experiment with as there are combinations to learn â€“ using the water Vigor followed by an electric shock, for instance.

To improve chances in combat three pieces of â€˜gearâ€™ can be equipped as well. These vary from the ability to add a flourish of flames to melee attacks to quicker reloading times. Incidentally, weapons can be upgraded via vending machines, as can Vigors.

It speaks volumes that even without these supernatural powers it would still be a brilliant game. Gun fights are often enthralling as most battles take place in large areas with monorail style skylines. These allow you to travel around the battlefields while shooting, at a pace you can control via the analogue stick. You can even leap off skyhooks onto enemies below to deliver a fatal strike.

Elizabeth can also create â€˜tearsâ€™ to bring more resources to the battlefield such as sniper rifles, med kits and places to take cover. Thereâ€™s only a certain amount of tears she can open though, so youâ€™ll need to think carefully and tactically. Never are you penalised too heavily after dying â€“ Elizabeth will bring you back from the dead not too far from where you died. This helps to keep the pace up and prevents combat from becoming frustrating, even when presented with groups of the harder to kill larger enemies.

Usually when a game has been stuck in development for a long time you can spot little tell-tell signs that ideas have been chopped and changed. Thatâ€™s not the case here â€“ it feels entirely seamless from start to finish. Thereâ€™s a little bit of padding just after the halfway point and some might find the body count a tad too high for their liking, but these are the only genuine downfalls.

Publisher 2K Games has been confident enough to believe that Bioshock Infinite will sell well without any multi-player modes, in a time when other publishers are determined to incorporate online play into their games whether theyâ€™d fit in or not. Buying Bioshock Infinite will to prove to these publishers that games of this ilk donâ€™t have to have deathmatches and such needlessly tacked on.

And buy it you should – this is the first truly essential game of the year. Considering that weâ€™ve already had a sizeable number of high-quality titles, thatâ€™s high praise indeed.