Two fine examples of box art have crossed our paths this week, so hereâ€™s our first â€“ and whatâ€™s highly likely to be our last â€“ box art review. 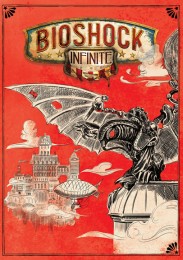 To silence those dismayed to find that Bioshock Infiniteâ€™s artwork had been designed to â€œentice uninformed frat boy typesâ€, an alternative cover has been printed on the reverse of the sleeve. Itâ€™s a fetching line-sketch of a Songbird â€“ one of Columbiaâ€™s airborne guardians â€“ along with a portion of the sky-high city in the background. The reverse bears a quote from the fictional 1889 â€˜Barriers to Trans-Dimensional Travelâ€™ guidebook: â€œThe mind of the subject will desperately struggle to create memories where none exist.â€ A blatant reference to Elizabethâ€™s special talent, there.

Gamers were asked back in December to vote for which alternative cover they wanted to see. After looking at the others, itâ€™s fair to say that the right choice was made. Thereâ€™s nothing particularly wrong with the other alternatives, but this red sombre effort easily eclipses them. 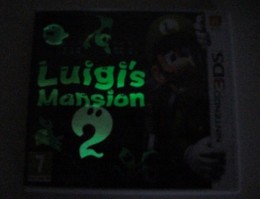 The second piece of box art couldnâ€™t be any more different â€“ Luigiâ€™s Mansion 2 caught our attention as it glows in the dark. Now thatâ€™s technology being harnessed to its full potential.

We tried our best to capture a image. The neat little thing about this is that are three ghosts on the cover, including Poulterpup, that donâ€™t show up when the box is viewed during daylight.

It reminds us of the glow in the dark Ghostbusters stickers that came free with packets of Trio biscuits many years ago. Showing our age here? Perhaps.

Coincidentally, earlier this week Miyamoto claimed that Ghostbusters had no influence whatsoever over Luigiâ€™s Mansion. This is something we find very hard to swallow.