Everyone loves something for nothing, so when some freeness is offered as a bonus for pre-ordering, or dished out at a games show, you’re not going to turn it down, are you? But you’re also not going to use it, are you? Let’s see what tat’s been languishing in a box in the attic for the last decade or two. 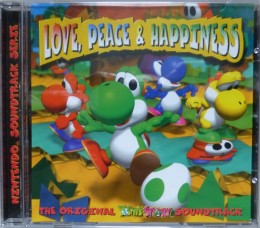 Ah, the soundtrack CD, a classic freebie – and still a common sight, even in these digital days. Sounds like a nice idea, but there aren’t many games that have music you’d want to listen to alone – mainly because that’s not what it’s for.

Yoshi’s Island is a case in point. It’s an incredibly (others might say insufferably) cute game, and the music is no different. The title, Love, Peace & Happiness, doesn’t exactly try to hide it.

The joy is almost deafening, and you’d struggle not to raise a smile when it first hits you. It’s another matter after that same tune has been recycled repeatedly in slightly varying musical styles. It must be tiring to be that happy all the time – it certainly is listening to it. 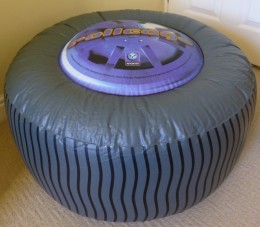 A Rollcage-branded inflatable tyre is definitely the most unusual pre-order incentive I’ve ever got. At a foot or so high, with a radius of about a foot, it’s large enough for even an adult human to sit on.

Being that large, inflating the thing with nought but my own puff took over half an hour. Was it worth the effort? No.

I seem to remember having it in my room for a while at the time – which apparently would have been 1999 – but I’m not sure it can have been used much. Certainly it’s pretty quick to deflate under load now.

My memory of getting these is strangely clear. Not where or when exactly – it would have been either GamesMaster Live in 1992 or the 1993 Future Entertainment Show.

But how: a man was walking around the exhibition centre literally throwing them on the floor behind him. Cue children scrabbling around on the floor to pick up Nintendo-branded pens and badges. Shameful? God yes, but I was one of those 12-year-old idiots. I didn’t even particularly like Nintendo; I was very much a Sega boy.

But on the plus side, it turns out the pen was significantly better than the usual promotional quality, as it still works 20 years later. That’s a hardy pen. 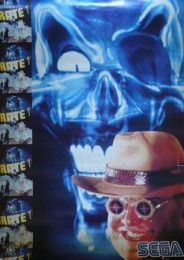 Now this I don’t remember getting – though the timing is about right for it to have come from one of the games shows mentioned above. It was definitely up on my wall for a good number of years though. It’s a classy item, after all.

Having not seen the Sega Pirate TV ad campaign since the early ’90s, I didn’t realise until I found this that the host is Steven O’Donnell, better known as Spudgun from TV’s Bottom.

Oh, and if you’re about to head to YouTube to get a Cyber Razor Cut, let me save you the effort:

But whatever you do, don’t go looking for the Sega Pirate TV music video for ‘Wonderland’ by Right Said Fred. You have been warned.