Crystal Dynamics are a developer who have been around a lot longer than most people realise, having first cut their teeth on the ill-fated 3DO back in 1992.

They were, in fact, responsible for the 3DOâ€™s original pack in-game â€“ Crash â€˜nâ€™ Burn. If that name rings a bell it might be because Eidos sneakily re-used the trademark for a generic PS2 and Xbox crash and smash racer in 2004.

Crash ‘n’ Burn was then followed up with Total Eclipse â€“ a game thatâ€™s not very well remembered but apparently had Atari execs very flustered when they saw it, as the textured polygons were way beyond what the Atari Jaguar could produce. This too ended up being a 3DO pack-in title, even though it was a bit on the shoddy side.

When the 3DO started to falter, the studio was savvy enough to bring their catalogue to the much rosier looking PlayStation and Sega Saturn, with a few nips and tucks along the way. The 3DOâ€™s Off-World Interceptor became Off-World Interceptor Extreme while Total Eclipse gained the subtitle â€˜Turboâ€™. Another early title was The Horde â€“ an underrated strategy game available on Saturn and PC. Crystal only published this one though â€“ the developer was in fact Toys for Bob, who are now best known for Skylanders. 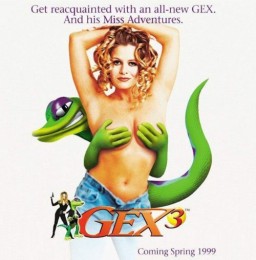 It was Gex who helped to push the publisher into the limelight â€“ a typical â€˜90s videogame character, donning black shades and spurting out irritating catchphrases – such as â€œIt’s tail time!â€ – Gexâ€™s second adventure saw the gecko leap into the realm of 3D with Gex: Enter the Gecko, and then again a year later in Gex 3: Deep Cover Gecko, which (dis)graced both PSone and N64. Pandemonium 2 was another popular platformer of theirs.

Less popular was Whiplash, which starred two test-lab animals chained together. Amusingly, the product description for Whiplash on Crystalâ€™s website has somehow become mixed up with Project Snowblind.

After Gexâ€™s short lived popularity, the studio spent several years on the Legacy of Kain series while pumping out a few licensed games along the way. Walt Disney World Quest: Magical Racing Tour was something of a curious one â€“ a Disney game minus the likes of Mickey and Donald, who were absent due to other publishers’ licensing deals. Just three actual Disney characters featured â€“ Chip & Dale and Jiminy Cricket, with the rest of the racing roster made up of characters from Crystalâ€™s own imagination. These included parrot Polly Roger and the rather dubious sounding Otto Plugnut.

As the Tomb Raider series worsened over the years, with Angel of Darkness being the all-time low, the franchise was snatched away from creators Core Design and passed over to Crystal. Arguably it was the high review scores that the studioâ€™s Legacy of Kain series received that led them to become the new home of Tomb Raider.

The last six years have seen the studio work on nothing but that franchise, and with Laraâ€™s latest being also her greatest, it seems like a good time to have a good look at Crystal Dynamics, via the miracle of Google Street View. So itâ€™s off to Redwood City, California, we go:

Well, we very much doubt that Lara would enjoy scaling this building – itâ€™s just a simple, plain glass structure. Disappointing.

They do have an unexpected neighbour though â€“ Dreamworks. Thatâ€™ll be handy if Square-Enix ever put them to work on a CGI movie tie-in between Tomb Raider titles, although the chances of that happening are about as high as Gex making a comeback.

A double take on Double Helix