When the original God of War was first envisioned we donâ€™t think the developers realised just how long the franchise would run for, otherwise they would have given Kratos a stronger backstory that other tales could be spun from.

Take God of War: Ascension as an example â€“ itâ€™s a prequel to the PSPâ€™s Chains of Olympus, which itself was a prequel. Thereâ€™s still enough new ideas present to make Ascension worth playing though. Online play is one such new inclusion, which apparently is bloody good fun. If youâ€™ll excuse the pun. 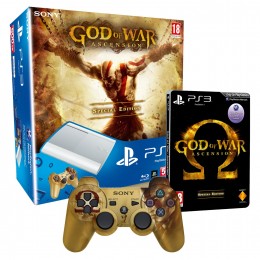 Scores so far include 7/10s from both Eurogamer and EDGE and 9/10 from SPOnG. “While this seriesâ€™ singleplayer template is showing its age, thereâ€™s plenty in Ascensionâ€™s multiplayer that deserves to survive the transition to PS4,” said EDGE.

Sony are even releasing a new PS3 bundle in celebration, available for around the Â£250-mark. It’s also possible to buy the ‘gold’ controller that it comes with on its own, albeit for quite a steep price.

Then we have a sequel to Sniper: Ghost Warrior, a game that sold way better than it deserved to. Publisher City Interactive, who even now are still relatively unknown, put a lot of money into advertising and as such it managed to get a fair bit of shelf space, especially in the supermarkets where it has been in their in-store charts for yonks.

Weâ€™d be very surprised if Sniper: Ghost Warrior 2 wasnâ€™t a significant improvement over the first one. If City Interactive wants it to become a long running franchise then it has to be good â€“ thereâ€™s no way people will be fooled into buying a bad game for a third time round. It should look nice at least, due to being powered by the CryENGINE3. A Wii U version is due at some point, where itâ€™ll face stiff competition from the very good Sniper Elite V2 which is due out soon.

Taking a punt? Itâ€™s a not-quite-full-price release and the limited edition is available for the same price as the standard. Don’t get too excited â€“ it only contains one new rifle and an extra character.

Naruto Powerful Shippuden is the sole new release for Nintendo formats this week. Just like last weekâ€™s Naruto Ninja Storm 3, reviews have been reassuringly positive. IGN gave this one an 8.0 â€“ â€œNaruto’s latest is the goofiest game the franchise has ever offered, and it works.â€ Itâ€™s nearly twice as good as Castlevania in their eyes, then.

Itâ€™s also a quiet week as far as downloads are concerned. Arcade-like racer WRC Powerslide was due out last Wednesday on XBLA and PSN, but it looks as if it was held back for this week.

Thatâ€™s joining Capcom’s Darkstalkers Resurrection, which is also on both XBLA and PSN. Eurogamerâ€™s 8/10 review of this is well worth a read.

Demos of Naruto Powerful Shippuden and Chasing Aurora arrive on 3DS and Wii U respectively, while Viking Invasion 2 â€“ Tower Defense storms onto 3DS eShop for Â£6.99. Pets Resort 3D and Jewel Master Atlantis 3D will be on the eShop from Thursday too â€“ the former is a whopping Â£24.99 while the latter a much more modest Â£4.49.

You can also now give Ninja Gaiden 3: Razorâ€™s Edge and Army of Two: The Devil’s Cartel a try via the demos on PSN and Xbox Live. We feel a bit sorry for Army of Two â€“ itâ€™s going to be released just a week after Gears of War: Judgment, which is going to seriously impact sales. The PS3 version may sell well off the back of PS3 owners wanting to play something similar, we suppose.