Lara starts her adventure alone, battered and bruised, doing what she must to survive. Her first kill is not a mercenary or even a mythical creature, but an innocent deer killed for sustenance. Thereâ€™s a strong emphasis on survival instincts throughout, with Lara having to make do with a primitive bow and a rusty axe for the first hour or so.

Once a few more weapons are added to the inventory, Lara doesnâ€™t quite come across as vulnerable as before, especially after yelling â€œRun you bastards!â€ upon finding a grenade launcher much later on. With her fellow adventurers held captive, sheâ€™s left baying for blood and revenge. Her murderous side is one that we havenâ€™t seen before, and really does take some time to get used to. Make no mistake â€“ Lara is back, and sheâ€™s a changed woman.

Four years, if not more, have gone into this franchise reboot and it certainly shows. We canâ€™t begin to imagine how many ideas and levels were left on the scrap-pile in order to deliver us one of the most brilliantly paced and tightly knit experiences of recent times. It looks spectacular too – it’s one of the few games that looks as good in-game as the screenshots. Vistas are often stunning, the lighting effects exemplary and environments packed full of intricate detail.

Combat is rather straight-forward but no less enjoyable because of this. Lara automatically ducks for cover and can scramble along the floor to avoid fire. Head-shots come easily, most gained without even trying. The enemy assortment is the usual array of heavily dug-in riflemen and archers, machete-carrying chargers, heavy units and pyromaniacs. The heavy units are troublesome until the shotgun becomes available; once their weak-points are exposed theyâ€™ll go down with one slug. Like Far Cry 3 thereâ€™s an fixation with fire; if you stay in one place for too long you can guarantee that a Molotov or stick of dynamite will be flung your way. Lara’s unlockable finishing moves are a little unnecessarily violent, but hardly on par with Gears of Warâ€™s famously grizzly kerb stomp.

Weapons can be upgraded and new skills gained by resting at camp fires. A nice touch is that all weapon improvements are â€˜make-doâ€™ efforts. A weaponsmith Lara is not, and so the enhancements are things like foam padding around the supports and magazines crudely taped together. Towards the end of the game most weapons gain secondary fire modes, including a silencer upgrade that helps Lara to get around the harsh and dilapidated island with a little less attention. 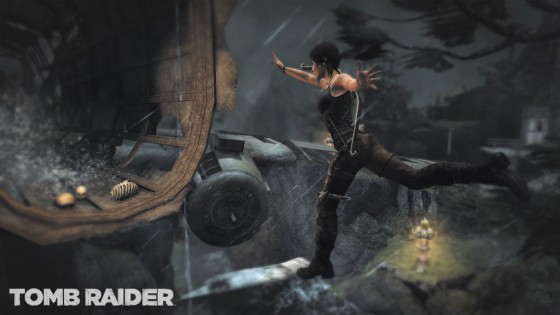 Stealth is entirely optional, thankfully, but when entering enemy settlements itâ€™s a good idea to take down a few enemies silently to improve your chances. This makes the bow and arrow an essential part of Laraâ€™s kit, and not only is it used for silent kills but also in puzzle solving. The difficulty level of puzzles is superbly judged, becoming trickier and more elaborate as the story progresses. Most have an environmental theme â€“ wind, fire, water, etc â€“ while a few are physics based. Get stuck for too long and Lara will provide a vocal hint. Itâ€™s also possible to gain clues by using Laraâ€™s monochrome â€˜survival instinctâ€™ display, which highlights any items of importance.

Itâ€™s this ability, along with some very clear sign-posting, that makes Tomb Raider a very smooth and highly entertaining ride. Everything that can be grabbed onto is marked with white paint; all walls that can be climbed have a very distinct look. Itâ€™s impossible to imagine anybody getting lost and not being able to work out what to do next. This does make it a little easier than previous Tomb Raiders, but never did we feel like our hand was being held. There’s plenty of scope for exploration as well – every couple of hours Lara finds herself in larger environments with plenty of hidden objects to find and challenges to complete.

Optional tombs are another thing that suggests that Crystal Dynamics wanted this to be something everybody could enjoy, from newcomers to those who have seen Lara at her lowest (hello, Angel of Darkness). These tombs are hidden across the island, each containing a puzzle to solve. Donâ€™t expect massive sprawling Zelda-like dungeons though, as theyâ€™re single-room affairs. The destroyed beauty of these areas is a highlight â€“ what were once places of worship have now become storage areas and ‘make-do’ facilities for the zealous thugs that inhabit the island.

Multi-player retains a lot of ideas from the single-player, including zip-lines, scalable cliff faces and the chance to salvage items to improve weapons. There are a few new inclusions too, such as machine gun turrets, traps that can be armed, and environmental features including sandstorms. The ability to scramble from cover has been replaced with a forward roll manoeuvre, while Lara herself doesnâ€™t become a playable character until level 60 is reached. Instead, Laraâ€™s fellow survivors are playable, with the chance to unlock extra characters as you rise up the ranks. 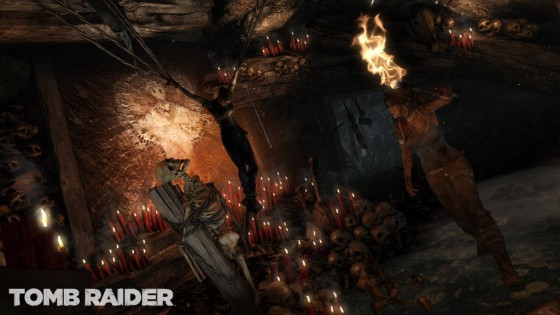 Just four multi-player modes are currently available, but each is fast-paced and â€“ most importantly â€“ fun. It’s a very similar package to Spec Ops: The Line’s multi-player, if you’re one of the few people who gave that a chance.

â€˜Free for allâ€™ matches are pleasingly chaotic, especially on the smaller maps, of which there are a fair few. â€˜Team Deathmatchâ€™ can be frantic too and here if you’re playing as a survivor there’s the ability to revive fallen comrades. You can also choose to respawn next to your team-mates or back at the base, should you need to rethink your approach. â€˜Cry for Helpâ€™ has an emphasis on teamwork â€“ you either have to find batteries and use them to power distress signals, or as the opposition try to keep the batteries away from the other team. Then thereâ€™s â€˜Rescueâ€™, which entails finding medical supplies and bringing them back to key points on the map. There are no sniper-rifles, which may be a blessing for some, although the bow can be just as deadly if aimed with precision. At present the pistols are alarmingly overpowered, especially with the ‘rapid fire’ perk but considering more online modes are planned there’s no doubt a patch to balance things out in the pipeline.

The visuals have been downgraded slightly for multi-player, which we assume is to keep the speed up, but itâ€™s clear that a fair bit of time has been spent on it. The fact that XP is generously handed out is sure to keep a lot of people playing until Lara is eventually unlocked.

She may have been out of the loop for a while, allowing the likes of Nathan Drake to steal the limelight, but this reboot is more than enough to re-establish Lara Croft as gamingâ€™s leading lady. Whatâ€™s more, Crystal Dynamics has done it with aplomb â€“ this is their finest work yet.