There are two video game characters obviously ripe for an endless running revival. Sonic Dash ticks one off the list, but someone needs to get Naughty Dog to stop wasting their time on PlayStation 4 and give the public what they really want: mobile Crash Bandicoot. And hey, Jason Rubin might have some time on his hands after the unfortunate events at THQ – ideal! 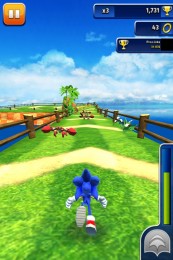 But it’s Sega who got their fingers out first, and realised that the only difference between an auto-runner and a Sonic game is the imprint in your thumb from pushing forwards. And the in-app purchases, of course. But more of those later.

With swipes left and right to move between the three lanes you run in, up to jump and down to spin, there’s little lost in the translation to touch screen. It’s reliable enough, except when obstacles come at you unexpectedly – from behind other obstacles, for example, which is more a flaw in level design than control method.

You’ll come across the same chunks of level again and again, though the order is jumbled each time. There’s a neat element of choice too: at the end of each section, the three lanes become options – which might include a change of zone (though the effect is largely superficial), a rollercoaster section, or banking the rings you’ve collected. Sort of like The Weakest Link, to cite a redundant pop culture reference.

Banking is relevant because, naturally, rings are a currency in Sonic Dash. It’s a bit wonky as a concept though, because if you die by hitting an obstacle, you keep your rings anyway. And the whole IAP system is rather pointless: the upgrades and items aren’t particularly necessary, and they’re not exactly fun either. But they are shoved in your face after virtually every go. Which, when the game costs Â£1.49 in the first place, is a bit bloody rich. 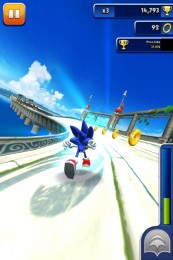 In fact, virtually everything that happens outside the game itself grates slightly. It’s far from an instant restart, for example, and the loading screen is bafflingly low quality – like someone compressed the image a couple of notches too far.

Getting back to the game itself – you know, it’s a bit of fun. It’s fast, slick, what level design there is is enjoyable, and when you’re allowed to play a rollercoaster section, that’s a lot of fun. Superficial, meaningless, dumb fun – like a Sonic game should be. And most importantly, collecting a ring makes the right sound.

It’s just a shame that it’s wrapped up in a slightly tatty, bothersome way. Give us some proper levels using the same game engine, sell new zones as IAPs, and Sega might just be into a bit of a winner.