If youâ€™re a wrestling fan, thereâ€™s a good chance you could be a thirteen year old boy. Coincidentally, THQâ€™s WWE SmackDown! series has been dominating the wrestling videogame scene for just over thirteen years. So THQ’s WWE games could be all youâ€™ve ever known, virtual wrestling-wise, if you are indeed thirteen.

“THQ almost managed to release the same game every year”

So what will become of the WWE games, now that THQ are bankrupt and Take-Two have acquired the WWE license?

Update: Between the writing and publication of this article, Take-Two announced WWE ’14 for release later this year, developed by current WWE developer Yuke’s.

Some fans may see it as a chance for change, hoping a new developer takes the reins, as critics have raised concerns about the series growing somewhat stale over the last… ooh, ten years or so. Annual WWE releases now fall in the same category as the annual FIFAs and Maddens of the world. So letâ€™s forget about that for a while, and look back at THQâ€™s WWE legacy. 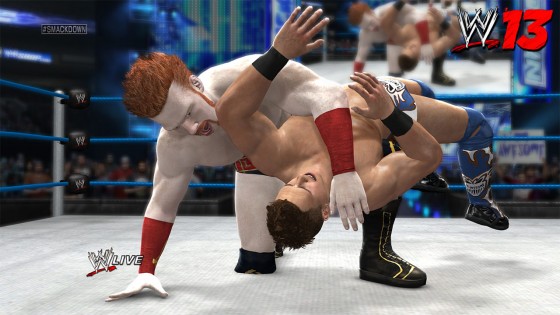 The newest addition to the series and THQâ€™s final WWE game. Whilst the gameplay and game engine remains mostly unchanged to previous WWE games, the addition of Attitude Era characters (wrestlers from the late â€˜90s) earned praise from fans. Rather than the usual story mode, players can work through the Attitude Era storyline, replaying some of the biggest WWE matches from 1996-1999 and explaining the feuds and backstories.

The character roster combines all of the modern WWE wrestlers with the Attitude era stars (such as Stone Cold, The Rock, HBK), making it the largest to date. Itâ€™s a shame the early â€˜90s stars such as Hulk Hogan or The Ultimate Warrior arenâ€™t available, but that would probably be wishful thinking (though thereâ€™s always WWE All Stars for the nostalgic).

WWE â€™13 is a decent effort, and wrestling fans who grew up with Degeneration X or Stone Cold Steve Austin should really enjoy it, but itâ€™s a clear show demonstration of how tired Yukeâ€™sâ€™ WWE games have become. A casual observer might have trouble picking it apart from WWE â€™12, WWE Smackdown vs. Raw 2011, and possibly a few earlier versions. Visually itâ€™s not pushing any boundaries, with a general feeling of â€œthis could look so much better…â€ 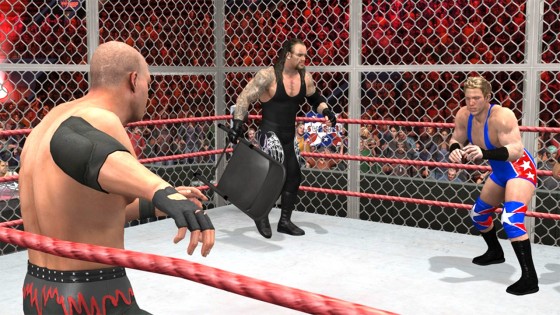 To make the jump to Xbox 360, the 2007 edition got a visual overhaul – the character models in particular jumping from 500 polygon models on the PS2 to 20,000 polygon models for the Xbox 360. The gameplay itself though remained relatively unchanged, apart from the introduction of a new grappling system and more interactive environments.

Grouping together all of the above WWE games highlights the big problem with the series – THQ have almost managed to release the same game, every year, for far too many years. The critics took notice – WWE SmackDown vs. Raw 2007 earned an 81% Metacritic rating, whilst the 2008 version managed 71%, being much too similar to the previous yearsâ€™ effort.

The following releases managed to improve things slightly, but havenâ€™t offered any radical changes to the formula. 2010 saw the introduction of the Havoc physics engine, and subsequent games have improved the animation and physics further, but thereâ€™s an argument to say that every WWE game since 2007 (at least) has just been a small evolution.

When Yukeâ€™s initially took up development of THQâ€™s WWE titles, the first SmackDown! titles were pretty remarkable – combining the complex gameplay of Yukeâ€™sâ€™ Japanese wrestling titles with the WWE brand. As the years went on, the SmackDown! series became THQâ€™s annual cash cow, and with few significant engine updates or gameplay changes, the series has grown somewhat stale. 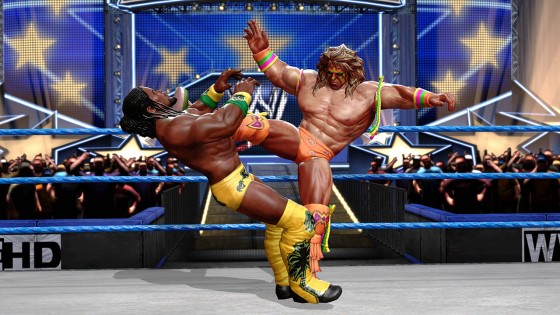 Fans of the arcade-style wrestling games of the â€˜90s may understandably be frustrated at the state of wrestling games. In 2011, THQâ€™s San Diego studio released a refreshingly different wrestling game, WWE All Stars. Designed by the man behind the â€˜90s classic WWF WrestleMania: The Arcade Game, and by a team that worked on Midwayâ€™s TNA Impact!, this â€˜90s inspired wrestling game offered fans an alternative to Yukeâ€™sâ€™ un-changing SmackDown series.

On a basic level, WWE All Stars is noteable for its All Star character roster, focused heavily on WWEâ€™s early â€˜90s legends, such as Hulk Hogan, Macho Man Randy Savage, The Ultimate Warrior and Rowdy Roddy Piper. Fans can put these classic wrestlers to the test against the current wrestlers such as John Cena or Randy Orton (whose name isnâ€™t nearly as good as Randy Savage).

WWE All Stars is a completely different style of wrestling game, having more in common with Tekken than the SmackDown series. Moves are powerful, over the top and somewhat comic, matches are fast paced and loud, and the graphics are heavily stylised, with the wrestlers sitting somewhere between superheroes and plastic action figures. Itâ€™s an entirely different experience, but weâ€™d happily say, â€œmore of this sort of thingâ€.

THQ were set to release a new game similar to WWE All Stars this year, titled WWE Brawl, but the project was cancelled last month after THQâ€™s post-bankruptcy asset sale. So we may be waiting a while for more of this sort of thing.

A collaberation between Sega and Yukeâ€™s, initially released in the arcades then later published on the Dreamcast by THQ, WWF Royal Rumble is an odd one to pin down. Released in the same year as Yukeâ€™sâ€™ first SmackDown title, it shares similar gameplay and presumably a similar engine, although WWF Royal Rumble looks and feels a lot better than its PSone cousin, by virtue of using a more powerful generation of hardware.

Ordinarily the Royal Rumble is a match with 30 participants, which is a slight issue for WWF Royal Rumble, as the game only features 21 characters. Somehow it managed though. One big feature was the amount of characters the game could display at once, with up to nine wrestlers on screen – previous wrestling games had been limited to about four. Despite the small character roster and limited game modes (a choice of two – exhibition or Royal Rumble), we somehow managed to lose many hours to this, mashing buttons furiously whilst sat in front of a Dreamcast.

The original SmackDown game, and Yukeâ€™sâ€™ first WWE game, after having developed several Japanese wrestling games. WWF SmackDown! was an instant success, and unlike previous western wrestling games it drew from Yukeâ€™sâ€™ Japanese heritage, focusing on grappling and providing a deeper story mode that developed the wrestling storyline throughout a season.

Prior to THQâ€™s WWF SmackDown!, THQ had been publishing WCW licensed games, with Acclaim holding the WWF license. Frankly, it was good news that THQ took over the WWF license, as Acclaimâ€™s last WWF games had started to look poor in comparison to THQâ€™s WCW games. Considering the WWF bought the WCW in 2001, it was probably quite fortunate that THQ got the license.

Mere numbered sequels werenâ€™t enough for THQ, so until the series rebranded as WWE SmackDown! vs. Raw in 2004, each sequel was identified with a smack-talking wrestling slogan. Seen next to each other, it does all look a bit rapey.

WWF SmackDown! Just Bring It was notable for being the first PlayStation 2 incarnation of the series, ramping up the visuals and bring more of â€œitâ€. The following release, WWE SmackDown! Shut Your Mouth, was the first game released under the WWE name, following the WWF-to-WWE renaming due to a lengthy panda-based legal battle (result: pandas won).

Considering that WWE â€™13 is the fourteenth game in the series, we wonâ€™t be covering all of them individually – itâ€™s safe to assume though, that each game in the series is incrementally better than the last one, the main updates occuring alongside hardware jumps.

This is an interesting one. WrestleMania 2000 was THQâ€™s first WWF game after grabbing the license away from Acclaim. Released in 1999, half a year before WWF SmackDown!, it was essentially a continuation of THQâ€™s N64-based WCW games developed by AKI (a series that included WCW vs. nWo: World Tour and WCW/nWo Revenge).

Considering that its predecessor WCW/nWo Revenge was the best selling third-party Nintendo game ever for its time, WWF WrestleMania 2000 had a solid base to work from. Its rather similar sequel, WWF No Mercy, is regarded by some as one of the greatest WWF games.

AKIâ€™s wrestling games were released as the Virtual Pro Wrestling series in Japan, and shared the same engine as their WCW and WWF games. They share some similarity with Yukeâ€™sâ€™ SmackDown series, particularly the emphasis on grappling, but the two do feel distinctly different. The N64-based WCW and WWF games were renowned for their solid-feeling animations and frantic four player battle royal matches. If THQ had continued with AKIâ€™s series, then modern wrestling games may have been quite different…

You could be forgiven for thinking SmackDown has been the only wrestling series for the last decade, but THQ did manage to pop out a few other WWE titles. Admittedly, mostly as spin-offs or rebrands rather than entirely different efforts.

While the SmackDown series was exclusive to the PlayStation, THQ released the WWE Raw series on the Xbox, developed UFC developers Anchor Inc. GameCube owners got to play with WWE WrestleMania X8 and XIX, games also developed by Yukeâ€™s and probably the most visually impressive titles of their time. THQâ€™s GameCube series continued as WWE Day of Reckoning.

Confusingly, THQ released WWE Legends of WrestleMania in 2009, a classic-themed wrestling game that could be mistaken for Acclaimâ€™s 2001 Legends of Wrestling. Again Yukeâ€™s developed THQâ€™s effort, which mixed the SmackDown games with wrestling legends and more arcade-style gameplay. Consider it an earlier, less fun version of WWE All Stars.

Itâ€™s sad news that THQ are no longer with us. What Take-Two will do with the WWE license remains to be seen. It could be interesting to see a new developer with a fresh perspective take over the series. As fun as the current games are, it wouldn’t be a bad idea to shake things up a little bit.