Usually when a format is on its last legs the release lists for it are full of licensed tat aimed at younger gamers and half-baked budget games. With this in mind it was a bit of a surprise when Sega announced Aliens: Infestation back in 2011. With WayForward at the helm, who were also working on Konamiâ€™s Contra 4 at the time, it turned out to be one of the formatâ€™s best licensed titles and arguably best thing to come out of Segaâ€™s involvement with the Aliens franchise. 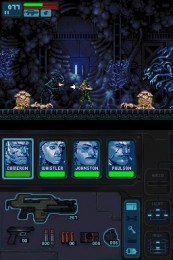 Out of all the Aliens games to be released over the years, Infestation resembles 1992â€™s SNES Alien 3 tie-in the most. Slow paced and objective based, it too offered large sprawling levels and plenty of Xenomorph encounters. It also shares an undeniable hint of Metroid, which is somewhat ironic seeing that Metroid was rife with blatant influences from the original Alien movie.

The synth-led soundtrack put the humble DSâ€™s sound chip through its paces and many of Aliensâ€™ familiar sound-effects were present and correct too, from the sound of pulse rifle fire to the screams the Aliens emit when being blown to bits. As was to be expected from a WayForward developed title the quality of animation impressed. Nice touches were frequent, such as the way one of the marines threw their helmet to the ground and used it as a footrest when entering a safe house.

The difficulty level was surprisingly tough but never unfair. Four marines were at your disposal to begin with, each with their own personalities and dialogue. When they died, they were gone for good. It was very easy to get attached to cast of characters – think losing a character in ZombiU â€“ and anybody who managed to finish the game with all 19 marines intact has our respect. New recruits were found by scouring the environments, usually hidden away at the end of an air-duct or similar. When youâ€™re down to just one marine tension was tight; we often found ourselves proverbially crossing our fingers that another stranded soldier wasnâ€™t too far away. 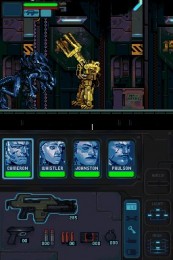 Although the environments were large they never seemed too convoluted for their own good due to the ability to use flares to mark locations. An invaluable map could be found on the touch-screen, as well an inventory and motion tracker. Keeping an eye on whatâ€™s ahead could prevent an Xeno from unexpectedly dropping down from above or creeping out of the shadows. As well as Xenos there were human enemies â€“ hired Weyland Yutani commandos â€“ who were smart enough to use crates and such for cover. Xenos also had enough intelligence to occasionally give you the slip, running along walls to avoid fire and then attacking from ceilings.

Including an obligatory battle using a Power Loader, the bosses put up and good fight and helped to add variety, as did a short side-scrolling APC shoot’em up sequence. Beating the second boss unlocked a mini-game opened up based on Bishop’s knife trick – just one of the many touches that showed WayForward loved and respected the license that theyâ€™d been asked to work with.

Easily available for under a tenner, those wanting to dust off their DS for one more adventure would do well to try tackling Aliens: Infestation. You may even find it helps to remove that sour taste left behind by the whole Aliens: Colonial Marines fiasco.