Just in case you’ve been in cryogenic sleep since 1992, Alien 3 is the one where there was only one Xenomorph and not a great deal happened. The movie had a very difficult production and at one point was even being filmed without a finished script. This ultimately led it to it receiving very mixed reviews from â€˜90s film critics and no doubt much anger from fans in AOL chat rooms.

Even the dedicated Alien diehards find this movie hard to bond with as aside from Ripley and the prisonâ€™s doctor there were very few characters worthy of concern. The majority of those being mauled to death were prisoners and I think itâ€™s safe to assume that they werenâ€™t banged up for petty crimes like inappropriate use of a Power Loader.

It is at least a very different movie from 1986’s Aliens. Due to the prison setting the only weapons on hand were fire axes and so Ripley and her cohorts spent most of the film trying to lure the Alien into various traps.

Unsurprisingly, massive liberties were taken with the various Alien 3 videogames. Letâ€™s take a look, shall we?

As Probeâ€™s Alien 3 game was released on no less than five formats, itâ€™s likely to be the one that most people are familiar with.

Reviews were very positive for a movie tie-in, and rightly so â€“ it was a genuinely good game. The brilliant fast paced music helped to induce a sense of panic, as Ripley tried to rescue prisoners from the maze-like levels before the time-limit ran out. Right from the start three different weapons were available, instantly giving something to experiment with. The grenade launcher would destroy aliens with one hit, but as ammo was limited it was wiser to save it for the harder sections and make do with the pulse rife and flame-thrower to get through the easier bits. 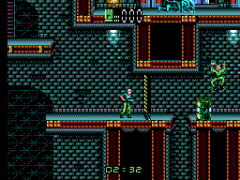 Controls were responsive, although it was quite easy to fall off ledges and moving platforms, plunging Ripley to her doom. Fail to rescue the prisoners and chest busters would put an end to them. You did however get to see where the prisoners were when this happened, thus giving a better chance of finding them second time round. Boss battles also helped to add a bit of variety, appearing every four levels or so.

Probe did a very decent job with the 8-bit Sega versions. Although the sprites were a lot smaller it retained the look and feel of the 16-bit iterations. We canâ€™t quite say the same about the NES version though… 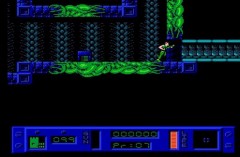 Published under Acclaimâ€™s LJN label, Probe were responsible for this one too. If you were to look through a bunch of random NES screenshots youâ€™d quickly notice that most have rather muted colour palettes. Not this one though â€“ the Xenos appeared to leave trails of florescent green paint behind them while Ripley looked like she’d just jumped off the page of a GI Joe comic book. Itâ€™s a slightly different game from 8-bit Sega version, with changes to the level design and music.

As NES movie tie-ins go, it was one of the better ones.

Like the above there were more Xenomorph encounters in the first 30 seconds of Accalim’s SNES tie-in than in the entire Alien 3 movie. This was the most polished of all Alien 3 games to be released, with an excellent soundtrack and intro:

Clearly designed with Metroid III fans in mind, it had a much a slower pace and levels that required exploration. There were even mission objectives to complete, some of which required players to find a new types of flame throwers and then use them to weld broken pipes and such back together.

The Xenos were a relentless bunch and as such there was always something on the screen to shoot at. Even after destroying the alien’s eggs it wouldn’t be long until there were more facehuggers crawling around. The real downer was that the platform jumping bits were a bit fiddly – Ripley often felt like sheâ€™s jumping in slow motion. It was a tough game too, due to the fact that you only had one life to finish the entire game with. There were password saves though, which thankfully were words that were easy to remember rather than random letters and numbers.

Also noteworthy was the brilliant use of Hicks’ â€œGame over, manâ€ speech sample. 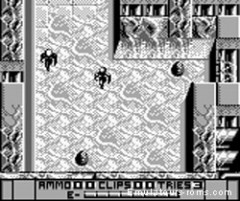 Seeing as the Game Gear could handle a decent version of Probeâ€™s tie-in, there was no reason the Game Boy couldnâ€™t. Well, thatâ€™s a slight lie â€“ there was a reason, that reason being development was passed over to B.I.T.S who decided that a top-down shooter would suit the license.

Easily the worst of the bunch of Alien 3 games, sprites were badly drawn and the labyrinth-like levels were lacking in variety making them very easy to get lost in.

The last boss was infamously maddening. The Alien Queen had somehow discovered the ability to teleport and warped all over the reasonably large final furnace level, making the job of squishing her in a piston way trickier than it needed to be. Oh, and did we mention that the piston took around a minute or so to reach from top to bottom? And that the Queen could teleport out of the piston’s way? And that if you touched it just once you died? Quality game design, there. 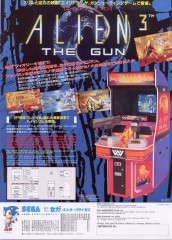 Sega chose to give this light-gun shooter its own alternative plot â€“ two Colonial Marines crash land on planet Fiorina 161 after coming across a â€˜super facehuggerâ€™. Thatâ€™s the facehugger who carries the Queenâ€™s embryo, if your Alien terminology isnâ€™t up to scratch. It wasnâ€™t a bad shooter at all, although Sega did use lots of ill-fitting bright colours. This was presumably to draw people towards the cabinet. Not only did the arcade machine have a bright purple exterior, but some Xenomorphs were this colour too.

Wouldnâ€™t it have been cool if Sega included this as an unlockable extra in Aliens: Colonial Marines? It certainly would have helped to soften the blow of how disappointing it is.