The videogame market in 1986 was incredibly different to now. The NES had just been released in Europe and the Sega Master System was still a year away from release. Games such as Dungeon Master, Catacombes 3D and Wolfenstien 3D which helped to kick start the FPS genre that we know today were still a few years off.

1993â€™s DOOM wasn’t the first FPS, but id Software has in the past officially cited Aliens as an influence. Itâ€™s very hard to spot anything blatant at first, leaving us to assume that John Romero simply wanted it to be a similar experience to Aliens, designed to scare with plenty of messy encounters with unknown creatures. Once we dug a little deeper into DOOMâ€™s plot though, we did find an influence of sorts. Just as Weyland Yutani were an evil corporation, willing to put peopleâ€™s lives at risk to research new biological weapons, so were DOOMâ€™s UAC. Resident Evilâ€™s Umbrella Corporation can also be traced back to Weyland Yutani â€“ a company that promotes a very different image to what really goes on behind the scenes. 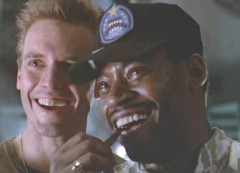 In the Aliens movie, Weyland Yutani is the first thing we see that has had an influence on gaming. Thatâ€™s then followed the iconic dropships carrying armoured vehicles, as seen in Halo, Starcraft, Killzone and the aptly named Dropship. Haloâ€™s marines are renowned for quoting Aliens’ marine chatter word for word, and weâ€™re sure we arenâ€™t the only ones to notice that the cigar smoking Johnson is a blatant homage to Alienâ€™s Sergeant Apone. “Every meal’s a banquet. Every pay-check is a fortune!”

Haloâ€™s success led to countless clones, all starring burly Space Marines spurting similar dialogue. Like Halo, many of these games shared a similar weapon assortment that’s near-identical to those used by the Colonial Marines. Pistols, shotguns, assault rifles, grenade launchers, plasma rifles and flame-throwers are all staples in just about every FPS weapon roster, and often handed to the player in that order too. The design of the Marineâ€™s pulse rifle in particular has become rather iconic, copied almost in its entirety. The secondary grenade fire option is also something that often features in todayâ€™s videogames.

ZombiU wouldnâ€™t have been nearly as tense without the motion tracker mapped onto the GamePad screen. This too first appeared in Aliens, likewise used to good effect to induce tension. ZombiU, Metal Gear Solid, Deus Ex and countless others also featured plenty of crawling through air-ducts, adjusting the camera and adding a wobble to the playerâ€™s movement accordingly while dragging themselves around.

Itâ€™s the sentry guns that are our favourite influence though. Around half-way into the movie Ripley and the remaining marines set up a pair of sentry turrets before welding the door shut behind them. The turrets rotate left and right slowly, using a red laser to detect movement. Halo 4, Call of Duty, Half Life 2 and Borderlands 2 amongst others allow players to set up turrets. A lazy way of getting kills, maybe, but still very effective. And cool.

A few other first persons shooters, such as Chronicles of Riddick, also see the player clamber into an exoskeleton suit for a final battle, akin to Alienâ€™s Power Loader. 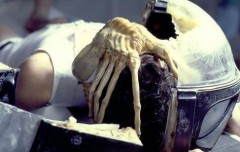 Half Life 2â€™s head crabs can be likened to Facehuggers, and the Xenomorphs themselves have had their fair share of suspiciously similar counterparts over the years. Team 17â€™s Alien Breed couldnâ€™t have been more brazen. There was even a game simply called Xenomorph, released in 1989 for Amiga, ST, C64 and MS-DOS. The story had an unlikely hero â€“ a janitor â€“ who after landing on a mining platform makes the discovery that the base has been overrun by aliens. Aliens that hatched from egg-like cocoons, no less.

Would the videogame market be different today if Aliens hadnâ€™t been released? It certainly had a huge influence over Halo, which in turn influenced a new generation of first person shooters. A few games had already used the original 1979 Alien film as an influence beforehand. The first Metroid was rich with uncanny similarities, for instance. Both are sci-fi adventures featuring strong female leads, starring creatures that have the capacity to attach themselves to the protagonistâ€™s head. Not convinced? Alien was directed by Ridley Scott; Metroid featured a boss battle against a creature named Ridley.

Itâ€™s worth bearing in mind though that both Star Wars and Aliens had plenty of their own influences such as Buck Rogers and the oft-forgotten 1959 Starship Troopers sci-fi novel by by Robert A. Heinlein. Itâ€™s quite amazing to think that Starship Troopers inspired Aliens, despite the movie not being released until 1997.