When Sega released Sonic the Hedgehog back in 1991, thereâ€™s no doubt that they knew they had a huge hit on their hands. Even though the â€˜hog then arguably went on to to star in more bad games than good, the fan base has remained loyal and more than willing to spend vast sums on rare Sonic merchandise for their collections. Today weâ€™re going to take a look at a few bits and pieces that have shifted for significant amounts on eBay recently. 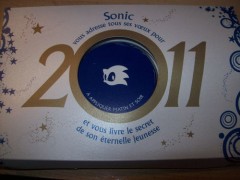 Our first port of call is something beyond even our wild imagination – Sonic The Hedgehog 20th Anniversary anti-aging cream. Yes, anti-aging cream. This promotional item is said to contain the “secret to eternal youth that keeps Sonic eternally youngâ€. Apparently Sonic Team never officially approved this item, which was only sent out to a handful of French journalists. It ended up selling for just over Â£100.

Also released to celebrate Sonicâ€™s 20th Anniversary were these Sonic watches. A complete set of three ended at $71, after 6 bids. This 20th Anniversary Sonic towel, of which only 1000 were made, didnâ€™t find a seller though despite the auction starting at a reasonable $50.

This Sonic plush toy from 1995 â€“ which had a suction cup attached, so it could be hung on a window â€“ sold for $255.00. Apparently this came from a Japanese UFO Catcher arcade machine. A Robotnik plush went for a notable $122 too, but this Walrus stuffed toy didnâ€™t fetch anywhere near as much â€“ $41. We guess itâ€™s meant to be one of the creatures trapped inside Robotnikâ€™s creations. Hardly one of the better known characters from the Sonic universe, thatâ€™s for sure.

Had you visited McDonald’s in 1994, you would have walked out with a Sonic 3 Happy Meal toy as well as a belly full of burgers. Apparently the hardest to find is the yellow ball with Sonicâ€™s face on. Weâ€™d wager this is because it was the least exciting of the lot, and so not many children dragged their parents into McDonald’s to get it. The other toys were pull-alongs with ripcords. A complete set ended at $24.50. 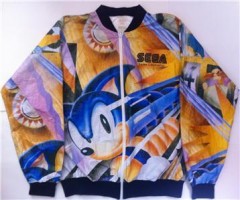 Another promotional item now â€“ an XL Sonic hoodie which was handed out to promote 2008â€™s Sonic Unleashed. It sold for Â£28, while a T-shirt from the same seller went for Â£11. More hedgehog branded clothing? Oh go on then. These Sonic Rush Converse trainers are pretty cool. Theyâ€™re our size too. Sadly, the auction has already ended, netting the seller Â£72. Also finding a new home was this very rare Sonic jacket from E3 1993, which appears to have Sonic Spinball artwork on. It certainly would have been hard for people not to spot the Sega reps wearing these.

And how about a matching accessory? The seller of this Super Sonic pin badge must have had a nice surprise when seeing how much it sold for â€“ a staggering $521.50.

We arenâ€™t sure how old this set of Sonic the Hedgehog drinking glasses are, but judging by the artwork weâ€™d say late â€˜90s. They sold for $26.99.

Finally, this US version of Sonic the Hedgehog on Master System sold for $560.00 due to having a UPC barcode sticker on the back. Sonic the Hedgehog was the last SMS game to be released in the US, hence its rarity. Seeing as the European version sells for just one or two pounds and is identical, that little barcode is arguably gamingâ€™s most expensive sticker.