Some know him as that brown thing whoâ€™s on T-shirts in the dark corners of HMV that nobody visits. Others know him as Domo-kun, the official mascot of Japan’s NHK television station. We discovered this for ourselves first-hand when visiting NHK in Tokyo around five years ago. What were we doing there? Obviously not becoming rich and famous.

Domo the Journey unofficially teleports us back to the â€˜90s for some simple platforming action. The opening woodland level has been designed to break you in gently. Thereâ€™s nothing too challenging on the road ahead â€“ just a few bottomless pits with moving platforms above them and enemies that continuously walk from left to right. Itâ€™s like the last 20 years of gaming never happened. 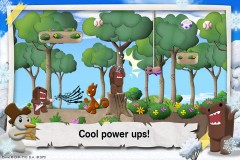 Itâ€™s also during the first couple of levels that two things come apparent. We found the virtual d-pad controls to be a little too small for our thumbs, leading to some unnecessary deaths. Weâ€™d like to point out here that our thumbs are in no way deformed. They are, by all accounts, average.

The other thing that we noticed is that, well, itâ€™s not exactly a good looking game. Backdrops lay motionless and quite often itâ€™s only Domo himself on screen thatâ€™s animated. Thereâ€™s some schizophrenia going on with the art-direction too. The platforming levels feature chunky, brightly coloured vistas while the boss battles are set in rendered environments. Thereâ€™s very little flare throughout and neat little touches are seldom seen. 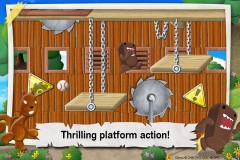 As soon as the second level the difficulty level ramps up astronomically. This set of levels are set in a sawmill, full of whirling blades and conveyor belts. Domo is armed with a camera that’s used to send enemies hurtling off the screen and a guitar for close range attacks, but both of these are in short supply. This seems to be a design choice made on purpose. Even though itâ€™s a premium app (currently Â£1.49) thereâ€™s the chance to buy more lives and weapons via in-app transactions. The first time we visited the store to have a browse we were prompted to confirm purchases of Â£1.99 add-on packs that â€“ unless weâ€™re mistaken – we hadnâ€™t even tapped on. The camera does recharge after use, but in a game that’s heavy on enemy encounters, waiting for it to do so is impractical.

Stick with Domo the Journey and the levels do become a little more interesting, including mine cart and snowmobile stages. Each level also has three gold stars to go for, based on the amount of items collected. It’s certainly a challenging game but mostly for all the wrong reasons. If the iffy controls don’t kill you, the poor collision detection will.

To be frank, the big brown fellow deserves better.