There’s a lot to be said for novelty. This doesn’t sound like a terribly original concept for a mobile game: a cute giant cat roams the streets setting free animals held captive by evil scientists. But when it’s your streets, well, then you’ve got my interest.

The level select screen is an OpenStreetMap of your current location with a grid overlay, but the levels themselves – each square in the grid – are several orders of magnitude cleverer. The transformation into a chunky, colourful world for the massive wonky-eyed cat to stomp around really is quite pleasing. 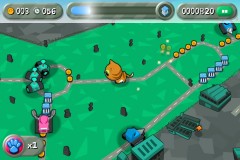 The streets are plotted accurately enough for more unusual street plans to be instantly recognisable, but inevitably buildings are rather homogeneous – other than certain landmarks which have been catered for specifically. Areas of green space and bodies of water are rather more effective in adding definition to the neighbourhood, and add a welcome splash of colour.

My first instinct was to try to break the game, but developers Supermono Studios have thought it through. If not all the streets in a square are connected, then the patch you start on will contain enough animals in peril to complete the level. If there are no streets, then there’s no level – and you get your gem back.

Ah yes, gems. And coins. And a power bar – which is depleted every time you play. We’re firmly in freemium territory, but it’s reasonably fairly done. Coins are broadly superficial, but it costs a gem to turn a grid square into a level, so those are the key currency. They’re earned through the usual three-at-a-time quests, and at a sufficiently generous rate to not act as a barrier – at least for a good while. The power bar is the more restrictive mechanism, effectively limiting you to ten goes in a sitting, and sacrificing a gem is the only way avoid waiting for it to recharge. So heavy users will have to cough up before long, but otherwise the monetisation isn’t much of a bother. 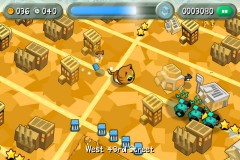 The gameplay isn’t particularly sophisticated – free the animals, collect the coins, avoid the vehicles – but with decent swipe controls and the robust location-based level generation, it’s a moreish little nugget. Soon you’ll have portals to other locations, allowing you to enjoy stomping around the streets of cities around the world. This isn’t just aesthetic: the grid layout of New York came as a welcome change to the winding dead-end roads and fiddly cul-de-sacs of the Thames Valley that I mooch around in.

There are bound to be more and more – and increasingly elaborate – games using this sort of location-based level generation. But right now, this is still a novelty – and I mean that in the best possible way.