Owning a rare game is one thing; owning a sealed version of a rare game is quite another. But to own something that was never commercially available to the public? Thatâ€™s taking collecting to the extreme.

Plenty of things only available to industry insiders have been sold on eBay recently. A good example is this prototype GBA cartridge containing an unreleased Capcom game â€“ Rocket Dog – which was acquired by the seller from a liquidation asset auction. It ended up selling for $457.67 after 16 bids. The screenshot of the start-up screen informs that it was in development in 2002 at 3d6 Games, who bought Tetris Worlds to the GBA. They also worked on the better-than-you-may-expect Altered Beast: Guardian of the Realms.

A couple of consoles now. Firstly, a rental Atari Jaguar from Blockbusters thatâ€™s boxed in a padded briefcase. The seller claims it looks like new. We wonder if thatâ€™s because not many people took up the chance to rent it? As well as three loose cartridges it also comes with a Jaguar CD game (Dragon’s Lair) even though the auction doesnâ€™t come with the toilet shaped add-on. 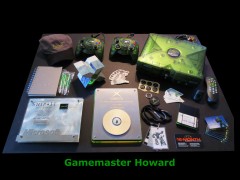 Secondly, and of slightly more interest, is this one of a kind Xbox launch package that contains amongst other things the first ever Xbox game to be submitted to Microsoft for certification. That game is Midway’s NHL Hitz, dated 28th June 2001. Itâ€™s curious to note that the Xbox didnâ€™t launch in America until 15th November. The translucent green Xbox has Bill Gates’ signature underneath. The auction also contained a replica of the infamous prototype â€œchrome Xâ€ Xbox, plus a commemorative plaque given to all members of the Xbox launch team. This little collection comes from Howard Phillips, who worked at Nintendo for ten years â€“ as senior editor at Nintendo Power – and then went onto spend another nine at Microsoft. The auction ended at $6,600 after six bids but the reserve wasnâ€™t met.

Phillips listed a Nintendo Power lot at the same time, including the original version of the Howard and Nester comic. Likewise, it failed to sell.

Also failing to find a buyer was this bundle of SNES carts and a scarily authentic looking rifle light-gun that was originally used to train the US army. The two cartridges are the functionally named Moving Target Simulator and Multi-purpose Arcade Combat Simulator, each of which were developed by Sculptured Software. The seller notes that the light-gun is â€œincredibly accurateâ€. Itâ€™s almost certainly bound to cause a scare at the postal department if they chose to x-ray the package.

Hereâ€™s something slightly different to the above â€“ a Skylanders Giant figure that was only handed out to Activision employees. Dubbed the â€˜holiday 2012 editionâ€™, itâ€™s a gold version of Prism Break that has a layer of imitation snow on top. It ended up selling for a giant $620.00, attracting 18 bids. 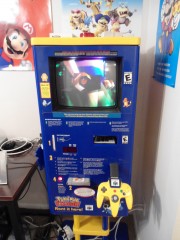 Back to Blockbusters to finish us off for this month. At first glance this Pokemon Snap Station Blockbuster Kiosk would appear to be a Pokemon Snap dedicated demo pod. Thatâ€™s not the case, however. After inserting either a Pokemon Snap or Pokemon Stadium cartridge into this device, Pokemon fans could then print off their favourite photos. The seller included a few rolls of paper, but at $3,000 it didnâ€™t find a buyer. The auction didnâ€™t include a copy of Pokemon Snap, but there was a â€˜not for resaleâ€™ demo cart listed on eBay around the same time. Unlike a lot of auctions weâ€™ve looked at here, this one did find a buyer â€“ for $309.31.

If Blockbusters still offered unique services like this in their stores, perhaps they wouldn’t be in quite the mess that they’re currently in.