Thereâ€™s a Hong Kong-based online retailer where, hidden away from the official console bundles and realms of third party peripherals, thereâ€™s a peculiar section titled â€œOther videogame consolesâ€. Here youâ€™ll find a variety of dubious looking handhelds of all shapes and sizes, pre-loaded with hacks of NES games and more.

We donâ€™t condone piracy here at Games Asylum – hence the lack of a link to the website in question – but the consoles found here are so brilliantly bizarre that we couldnâ€™t resist taking a thorough look. Most of these devices donâ€™t even have proper names, let alone adequate descriptions, so weâ€™ve taken the liberty with some of them.

If curiosity gets the better of you, it shouldn’t be hard to spot the websiteâ€™s name from the watermarks. 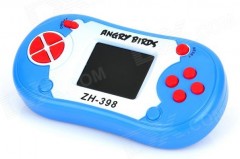 Costing less than Â£10, we very much doubt that the â€œAngry Birds ZH-398â€ has a particularly high build quality. Well known games such as Zumba, Plants vs Zombies, Pac-Man and â€œAnger Birdsâ€ are shown on the main menu. It’s existence is sure to anger Rovio, that’s for sure.

Itâ€™s impossible to tell if the 32 games it contains are genuine or bootleg clones, but we assume the latter. 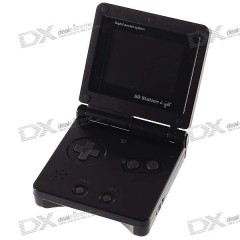 Only a fool wouldnâ€™t be able to spot the influence behind this handheld. There’s one major difference between this and the Game Boy Advance SP though â€“ this shameless clone has TV-out support. 111 games are built-in, and it also comes with a cartridge containing another 380 games.

Usually these cartridges contain just a handful of games with repeated names. Bootleggers are cheeky like that. 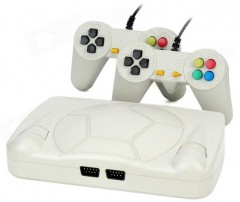 Just to show that theyâ€™re down with the kids, this consoleâ€™s lid resembles a football. The box it comes in also features artwork from Street Fighter and Spider-Man. Although it does resemble an original PlayStation, all of the games included are FC (Famicom) titles. Turtles, Robocop, Dragon Ball Z, Donkey Kong, Alien 3, Terminator 2 â€“ the list of licensed titles it contains is near countless. A lawsuit waiting to happen. 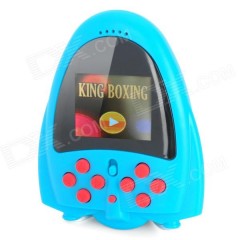 The real name of this little handheld â€“ which comes with a lanyard so it can be carried around your neck â€“ is the not very catchy â€œYSDX-635â€, so you can see why weâ€™ve given it a much more apt name. It appears to have the same insides as the â€œAngry Birds ZH-398â€, offering the same games and having the same screen size.

If anything, it would be a conversation starter when pulled out in public. 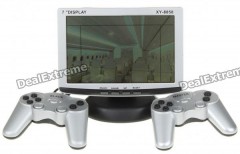 Weâ€™ll let the official blurb do the talking for this two player LCD game: â€œThis truly awesome game console is powered by 3 double A sized batteries. It is a Counter Strike gaming console with a 7â€ screen. It is a truly great way to relive the action of this great game and share it with your friends. Since it is battery operated you can even bring this game camping or anywhere else you might be and don’t have electricity. This computer style gaming console is capable of either 1 or 2 players and has 2 controllers included. It is a great way to pass by those boring moments in life and save a little money by relaxing at home. Get yours and start enjoying this unique set-up today.â€ 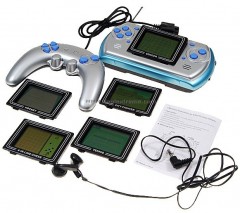 Never mind the above consoles being packed full of retro 8-bit games â€“ this handheld comes with four interchangeable LCD games, like the ones that Argos used to sell in the ’80s and early ’90s. Hockey, Chess, City Fighter and Tennis are their self-explanatory names. It also has a FM radio built-in and comes with a pair of earphones which weâ€™re willing to bet are the worst quality known to man. For another unknown reason, a joypad has also been packaged with it. It reminds us of that infamous prototype PS3 controller.

Costing just over Â£10, which is slightly more than the other devices weâ€™ve covered so far, the D-Cat 8 has a slightly larger screen clocking in at 2.4â€. Again, games are built-in â€“ 100 of them, no less. The fact that the game list is located on an external filing sharing website suggests to us that itâ€™s full of NES/Famicom games.

â€œPerfect as a gift for children, or for adults as a time killer,â€ reads the description. Those sharp corners look like they could kill too. 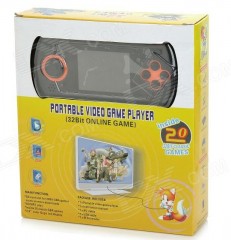 If this one looks familiar, itâ€™ll be because the casing is identical to the officially licensed SEGA handhelds that Blaze distributes in the UK. The inside grubbings are totally different, however. It appears to be a clone of the GBA, containing 20 GBA titles and has an SD card slot allowing more to be downloaded. We assume thatâ€™s where the â€œonlineâ€ part of the title comes from.

The box art features images of Tails, Metal Slug and, rather oddly, Woody Woodpecker. What an unlikely trio.

â€œPlay with your finger and open your wisdom,â€ reads the front of the box for this hybrid MP3 player/gaming device. Laugh? After catching our breath we certainly did. Like the above LCD game, this one doesnâ€™t appear to be breaking any copyright laws â€“ itâ€™s just an MP3 player with a built-in â€˜Simon Saysâ€™ style game which we assume changes with the beat of whatever music youâ€™re listening to at the time.

The limited amount of memory (just 128MB) would explain why it costs less than a tenner.

Finally, we have this device that would more than likely have Bill Gates frothing at the gills if he knew of its existence. Available at less than half a price of an actual Kinect, itâ€™s said to offer 23 different 32-bit motion controlled games. Their names pretty much say it all â€“ amongst them are â€œHitting Miceâ€, â€œHappy Mouseâ€, â€œHorse Racing Speedâ€ and â€œBroad Jumpâ€.

If Microsoft does in fact have one of these in their procession, weâ€™d wager that there were fits of laughter the first time they tried it out.