Last week gave us hack and slashers Anarchy Reigns and Ninja Gaiden: Razorâ€™s Edge, and this week weâ€™re on the receiving end of another â€“ DmC: Devil May Cry. As fans of the genre, we couldnâ€™t have asked for 2013 to have got off to a better start.

Reviews of the franchise reboot appeared online early Monday morning, ahead of its Tuesday release date. Although the game had its fair share of naysayers prior to release, reviews so far have been incredibly positive. Currently it has a Metacritic average of 87%, based on 37 reviews. As predicted, Metacritic user reviews have been less favourable. The best one weâ€™ve read so far is the one where somebody describes the graphics as â€œbeing boringâ€. Draw your own conclusions there.

Where has all the negativity from fans come from? Many arenâ€™t happy that it has been handled by British studio Ninja Theory, of Heavenly Sword and Enslaved fame, while others arenâ€™t too chuffed with Danteâ€™s new image. Our opinion on this is that if developers didnâ€™t rejuvenate their franchises every once in a while, Lara Croft would still be looking like this. Shudder. 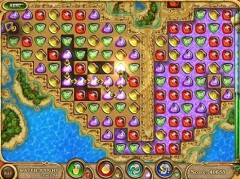 There are a few other games arriving at retail, three of which appear near identical judging by screenshots alone – The Treasures Of Montezuma 2 and 4 Elements 2 on DS and 4 Elements on 3DS. All three are gem-smashing puzzle games available at budget prices. Thereâ€™s also Mystery Case Files: Prime Suspects on DS, which is yet another one of those hidden object games.

For a second week running there doesnâ€™t appear to be anything new on XBLA. PSN is looking quiet as well, apart from Siren and Disgaea: Hour of Darkness arriving as PS2 Classics. It does appear though that PS3 owners are also getting some exclusive Far Cry 3 DLC in the form of the High Tides co-op pack, which picks up where the six original co-op chapters left off.

Something has caught our eye on the 3DS eShop. That something is the pleasingly nonsensical sounding Tokyo Crash Mobs. Itâ€™s a puzzler based around throwing and rolling people into queues of people, complete with a story mode based around a pair of bargain hunters. Itâ€™s being published by Nintendo themselves so weâ€™re surprised by the lack of press coverage. Nintendo Life gave it 7/10 earlier this week.

Nintendo fans have another two to consider as well – Mahjong Mysteries â€“ Ancient Athena on 3DS eShop for Â£4.49 and Zombie Skape on DSi for Â£1.79. A video of that last one can be found here.