Hundreds is confident: it sees no reason to explain itself, and assumes you’ll figure it out. That’s admirable, but there’s a fine line between confidence and, well, being a prick. Thankfully, Hundreds isn’t a prick – most of the time. 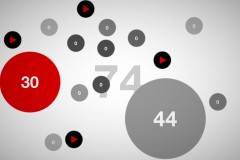 And it’s right, you will figure it out. Touching a circle makes it grow, and the number inside increase correspondingly. When all the circles sum to 100, the level is complete. But if a circle hits something while it’s growing, it’s game over. That’s basically it.

The game riffs on this idea for a while, testing your reflexes with fast moving circles, or your delicate touch with a tightly packed screen. Most of all it tests your patience, failure usually being a result of pushing your bloody luck. Waiting for your moment is crucial.

But before long complications are thrown in: crosses can’t be moved, gears pop circles on contact, snowflakes freeze anything they touch – to name a few. It’s in combining these that the game produces its cleverest levels, and begins to test your puzzle solving skills, speed, and even manual dexterity. The variety of the levels really is remarkable.

Some will try your patience, but not always in a bad way. It’s not often that I’ll play through 100 levels in three sittings, but there’s a maddening compulsiveness to this – which may amuse those around you if, like me, you end up swearing at yourself. 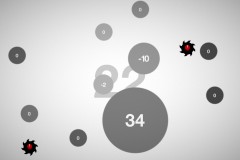 The odd level crossed my own personal border from fun over into insufferable, and the game is clearly aware of that possibility, as levels are opened up in fairly generous batches. It was only on a handful of levels that I told the game where to shove it, but what a relief that I could.

It sounds good, very much in keeping with the visuals – which you’ll have noticed are rather smart. It was disappointing to note the odd bit of slowdown on my iPhone 4 though.

But no matter. Semi Secret Software have teased impressive variety from a simple concept, and mainly without being a prick.