After over a month of no new releases at retail, thereâ€™s finally something out you can run to the shops and buy â€“ SEGAâ€™s Anarchy Reigns. At Â£19.99 – or slightly cheaper online if running isnâ€™t your new yearâ€™s resolution – it wonâ€™t break the bank either.

Why is it only twenty quid? We have a few theories. It was released in Japan just after SEGA announced that their future involves focusing on core IPs, so it could be that they simply want to wash their hands of it and get it out. This would also explain the lack of promotion.

Another theory is that the Platinum Gamesâ€™ Bayonetta didnâ€™t start shifting in significant numbers until it dropped to Â£20, so it could just be SEGA speeding up the inevitable.

Our last theory is that, well, itâ€™s not quite a AAA title and thereâ€™s (potentially) a lot of those about to be released in the next three months, including this generationâ€™s three most delayed games â€“ Bioshock Infinite, Metal Gear Rising and SEGAâ€™s own Aliens: Colonial Marines.

It is a very good game though, but be aware itâ€™s more Mad World than Bayonetta. We enjoyed the variety of the missions in single-player but found the franticness of the online mode a little too over the top. To quote EDGE, you spend most of the time being punched from pillar to post. The focus on fancy and elongated combos doesnâ€™t translate to the online modes well at all, as we said in our review.

360 Gamer magazine however thought the opposite â€“ they enjoyed the carnage the 16-player battles had to offer.

Ninja Gaiden: Razorâ€™s Edge on Wii U is reported to be out this week too. It’s not a very good sign of the Wii U’s current position that online retailers are incredibly conflicted about the released date. GAME and ShopTo say itâ€™s out Friday, Play and Amazon have no release date, and Zavvi reports itâ€™s out in May. ShopTo does claim to have it in stock though, and seeing as it wouldnâ€™t be beneficial to lie about such a thing, we can only assume that it is in fact out this week. Eurogamer currently has banners promoting it as well. We doubt that would be the case if it wasnâ€™t out until May.

Although based on the terrible Ninja Gaiden 3, Razorâ€™s Edge is a massive improvement and has gained such review scores as 7/10 from Metro GameCentral and 7.6 from IGN. Lest we forget, they gave Ninja Gaiden 3 a miserable 3.0.

NBA 2K13 on Wii U is another without a solid release date. GAME and Zavvi claim itâ€™s out this Friday but the other online retailers donâ€™t seem to know. Or indeed care. 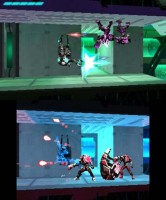 There doesnâ€™t appear to be anything new arriving on XBLA, which rarely happens, but there is the retro-style platformer Life of Pixel for PlayStation Mobile for Â£1.59, the oft-delayed Fractured Soul on 3DS eShop at Â£7.19 and the NES shooter Blaster Master on 3DS Virtual Console for Â£4.49.

Thereâ€™s also a release for the Wiiâ€™s Virtual Console â€“ the NeoGeoâ€™s Ninja Masterâ€™s Haoh-Ninpo-Cho at 900 Wii Points. It’s a good week for ninjas, it would seem.