It’s time for another of our regular look backs at a video game magazine of old. This time our incessant rummaging around the attic has unearthed Future Publishing’s unofficial Dreamcast magazine, DC-UK. 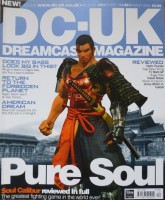 Word – by which I mean Wikipedia – has it that Sony Computer Entertainment Europe stopped Future Publishing from pitching for the official Dreamcast magazine license. Which was presumably the only time that Sony were concerned by what Sega were up to with the Dreamcast.

So Future’s DC-UK ended up as an unofficial magazine, but like the Official Dreamcast Magazine, its first issue came with a video. Yes, an actual, real-life VHS cassette. 1999, eh?

There were some notable absences from DC-UK’s video, chief among them first-party games – for obvious reasons. It was third-party all the way then, but with the likes of TrickStyle and Power Stone it wasn’t all bad by any means. It did have a curious fetish for menu screen footage though.

The magazine was a little unusual inside: reviews (DC-NOW) lined up first, followed by news (DC-EXPRESS), then previews (DC-NEXT). Nestled amongst those were some pleasingly daft features, including asking people from the fashion industry about Dreamcast characters’ dress sense, and interpreting Nostradamus as having predicted Dreamcast games.

The first issue review running order was a little controversial too, leading with TrickStyle, ahead of all the first party games. But TrickStyle, Sonic Adventure and House of the Dead 2 all got 9s, so Sega probably got over that slight against them. 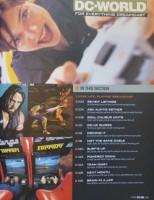 The DC-WORLD section closed the magazine, incorporating the usual tips and letters, and the intersection of the two, Ask Auntie Esther. That was Esther Woodman, now Future Publishing’s Operations Director – which has a slightly different ring about it to ‘Auntie Esther’.

In a nice touch, representative of the regard the magazine had for its audience, part of this was given over to plugging readers’ sites. Those featured included the forerunner for this very site, DigiApe, and Console Gamer, a site run by Tom Bramwell, now editor-in-chief of Eurogamer. There’s a not particularly flattering comparison to be had there.

Editor Casper Field went off to launch Mr. Dreamcast after issue 6, when now-veteran games journalist Keith Stuart took the helm. Changes weren’t far behind: issue 8 experimented with a red masthead rather than blue, which only confused people and apparently hit sales; from issue 9 the sumptuous matte laminated front cover switched to a mundane gloss.

It’s worth pausing briefly at issue 9, to appreciate the horror of the â€˜DC-UK STUNNA!’ on page 3. The accompanying copy must be reproduced in full, if not the image, which you can well imagine:

WANTED: DEAD OR ALIVE
[caption] Kasumi: beam me up, Totty!
Hey, fight fans! For this issue’s page 03 stunna we’re phwooartunate to have the gorgeous Kasumi, 20, from the boobtastic beat â€˜em up Dead or Alive 2. This Tokyo totty may look as if butter wouldn’t melt in her mouth, but she has a couple of Lethal Weapons we wouldn’t mind being smacked around the head with! For more on all the DOA2 lovelies, check out our massive preview on page 072!

Apologies to anyone with bleeding eyes as a result of reading that. Fortunately, it didn’t develop into a regular item.

Issue 10 brought with it a complete redesign, switching to a more standard running order, pushing reviews behind previews and news. It also knocked the brightness up a notch, splashing a bit more colour around the place – not for the better, to my eye.

There were bigger waves following issue 11 though, when it turned out that a cover-mounted cheat disc handily circumvented the Dreamcast’s region locking, opening up import gaming to anyone willing to hand over Â£2.95 to their local newsagent. Whoops!

The magazine ran to 20 issues, one fewer than the official magazine. Let’s finish with a flick back to its early days. 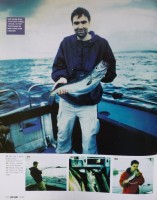 Having put an end to each of Nintendo Gamer, PSM3 and Xbox World in 2012, Future Publishing no longer have any unofficial single-format magazines. Big shame that – they’ve been some of our favourites.