Metacritic has been on the receiving end of some right old douchebaggery this year. Rest assured though that the scores below arenâ€™t based on the site’s infamous user reviews.

If that was the case then you would be seeing the likes of Mass Effect 3, Diablo 3 and FIFA 13 listed below, which currently have ludicrously low user scores of 4.5, 3.8 and 4.6 respectively. I think we can all agree that these three arenâ€™t quite the worst console games to appear in 2012.

Statistically, this little lot are:

This is the third game to be based on Spikeâ€™s TV show, but whereas the first two only stunk up Xbox Live Arcade and PSN, this third attempt made it out to retail in the US. Out of the five critic reviews on Metacritic, not one of them is above 50%, and all five highlight the lack of content and horrifically long loading times.

The Xbox 360 version is region-free if any gamers outside the US ever fancy seeing how bad it is for themselves. If thatâ€™s the case then do drop us an e-mail â€“ weâ€™ve got some chocolate shoes that need shifting.

In a way we feel sorry for Nihilistic â€“ this high-profile shooter reportedly only had a five month development cycle. With such a short amount of time to get the game ready for release, was there ever a hope in hell of it being any good?

Amazingly, even with such review scores as 1.5 from Destructoid and 2/10 from EDGE, plenty of gamers were quick to defend it. We had to laugh upon seeing somebody on a forum say â€œIf you give it a couple of hours it becomes quite a good gameâ€, because apparently the single-player mode can be finished in a hour.

Proving that reviews of bad games are always the most amusing to read, Eurogamer Italy notes the â€intolerable lack of Chuck Norrisâ€, G4TV compared it to a packet of Funyuns onion rings by saying that “you can only take so muchâ€, while Xbox 360 Magazine said that it’s “like playing a port of Cannon Fodder coded by a dog while the entire population of America shouts at you”.

After we played the trial of this movie tie-in we felt as if we owed our Xbox 360 an apology for sullying the HDD. Itâ€™s that bad. 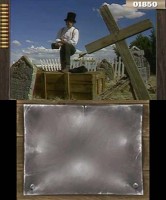 Just because a device is able to playback FMV doesnâ€™t meant that developers should re-release crusty old FMV games on it. Especially seeing that most of them, if not all, werenâ€™t any good the first time round.

Releasing Mad Dog McCree on the Wii did kind of make sense, because the Wii Remote makes a handy make-do light-gun, but to release it on a handheld without one makes no sense at all. Moreover, it wasnâ€™t even in 3D.

Now hereâ€™s the epitome of lazy â€“ outside America this mini-game collection is simply known as Sports Connection, yet the PAL version is still referred to as ESPN Sports Connection on the loading screens. The developers couldn’t even be bothered to open their art-package and remove the ‘ESPN’ bit. As Nintendo Life said, this collection only seems to exist because somebody at Ubisoft thought â€œHey, thereâ€™s bound to be a sports package released for the Wii U at some point so we might as well make ours the firstâ€.

Sadly, itâ€™s not the only Wii U game on this list either.

The Game Party series has been a frequent offender since first appearing on Wii back in 2007. Game Party 3 saw the series ‘peak’ with an almighty 37% Metacritic score, while Kinect controls couldn’t save the Xbox 360 version Game Party: In Motion. With a 29% average for this latest endeavour it would seem that the series is back to square one again.

Thereâ€™s a story mode to play through this time round â€“ which involves a randomly chosen character playing various games to get over the loss of his dad â€“ but the cut-scenes are apparently terrible and cannot be skipped. Itâ€™s almost as if the developers purposely wanted whoever brought it to suffer.

Thundercats, no! The DS may be on its last legs but thatâ€™s no excuse for publishers and developers to release absolute garbage like this on it. The reviewer for Digitial Chumps even claimed that after the second level no new enemy types are introduced, thus giving even less of an incentive to keep playing.

Itâ€™s fair to say that the license has potential, but with the new cartoon series failing to capture the imaginations of todayâ€™s youths and the new action figures currently loitering in bargain bins, chances are no publishers are going to pick up the license again.

This survival horror romp holds the acclaim of being 2012â€™s first terrible game, making an appearance on Xbox Live early January. Between then and the end of this month, just two other games managed to gain lower scores. We wonder how the developers feel about this? Ashamed we hope. Eurogamer gave it a resounding 2/10 – “Amy fails on all counts. It’s plagued by jerky movement, poor scripting, weak puzzles and shoddy checkpointing, but it’s also a characterless mess of themes and ideas swiped from a dozen better horror titles.â€

Shortly after it was released the developers posted a message on their Facebook page suggesting that gamers play the game on easy mode to prevent becoming frustrated. We fail to see how this would resolve the other issues Eurogamer, along with many others, pointed out.

Thereâ€™s always a WiiWare title to be found when looking back at Metacriticâ€™s worst games of the year. In 2011 it was 101-in-1 Explosive Mix, while in 2010 there were no less than three games on the list â€“ Bloons, Kung Fu Funk: Everybody is Kung Fu Fighting! and the catchily named 5 Arcade Gems.

Of the six critic reviews, the highest for Zombii Attack is a mere 30% from Destructoid. â€œZombii Attack almost feels like anti-videogame propaganda. Think of every negative description anyone has ever used for videogames (mindless wastes of time, brain-cell killers, contributors to the obesity epidemic in the United States or the low birth rate in Japan, a way to miss all opportunities for genuinely worthwhile experiences that life has to offer, a way to destroy any and all potential for productivity, etc.), and it’s probably an accurate description of Zombie [sic] Attack.â€

And here it is – statistically the worst piece of software to be published in 2012. In the (translated) words of Eurogamer Sweden: â€œI’m really upset that it isn’t illegal to sell garbage like this to innocent children, at a very steep price at that. Any kid who gets this as a Christmas present will have his or her holidays ruined, and anyone who bought it should get their money back with personal apologies from the game’s developer.â€

We wonder if that title is a breach of the trade description act, because thereâ€™s not a single review on Metacritic above 26%.