Usually around this time of year we take a look back at a Christmas themed game. Thereâ€™s no retro look-back this year though â€“ weâ€™ve gone with something a bit different, like Channel 4 broadcasting an Alternative Queenâ€™s Message on Christmas Day. We think they still do that, anyway. Weâ€™re usually passed out on the sofa by mid-afternoon.

You put the kids to bed late last night so they wouldnâ€™t wake up until at least 8am on Christmas Day. Itâ€™s the oldest parenting trick in the book but it works. Now itâ€™s time to open the presents, just like in Segaâ€™s Mega Drive classic ToeJam & Earl.

Remember kids â€“ itâ€™s better to give than receive, unless somebody has given you a parcel containing mouldy cabbage.

Those who were unprepared for Christmas no doubt spent last night playing Parappa the Rapper. 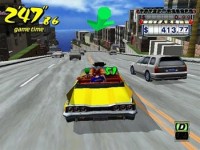 With the kids playing with their new presents, and having had a quick shower with a newly acquired soap on a rope, itâ€™s time to pick the family up.

Thereâ€™s no chance of making any crazy money here, but the smell of your Auntâ€™s rather overpowering perfume may linger in the car for a day or two. 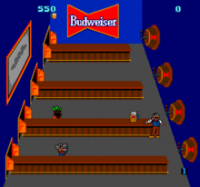 With the family now seated, itâ€™s time to crack out the beverages. Some want tea, others coffee. Seeing as itâ€™s Christmas its customary for the kids to get loaded off sugary drinks too. Oh, and your Aunty is asking if thereâ€™s any Babycham. You did remember to buy some, didnâ€™t you?

Juggling many drink requests at once is what made Midwayâ€™s Tapper (aka Root Beer Tapper) such an addictive experience.

Turkey, sprouts, roast potatoes, parsnips, sausages, gravy â€“ thereâ€™s a lot of things to cook and prepare. Can’t forget the cranberry sauce either. Hopefully that half-finished jar that’s in the fridge from last Christmas will still be all right to use.

The kids donâ€™t like sprouts but youâ€™ll still stick a couple on their plate in hope that theyâ€™ll eat them. This is exactly the type of sneaky trick we expect Cooking Mama to get up to back at home.

Ever since it was released in 1982, it has become customary for the animated cartoon short to be shown on TV at some point on Christmas Day. This year itâ€™s getting a sequel – The Snowman and the Snowdog.

Crash Labâ€™s iOS tie-in was released in the UK on 9th December and retains The Snowman’s unforgettable pencil-framed style. Unforgeable because we’ve seen it at least 25 ruddy times. No doubt The Snowman and the Snowdog will be shown on TV for the next thirty years.

Nowadays the BBC likes to put on a kids’ CGI movie in the afternoon. Weâ€™re pretty sure theyâ€™ve shown Shrek films for the past three years running, meaning itâ€™s likely that theyâ€™ll be showing Shrek Forever After this year. Or maybe Ice Age 3. Or that one with the owls.

Take your pick â€“ they all had mediocre videogame tie-ins.

The Quality Street are out and so are a selection of board games. Aunty said she canâ€™t play any of them though because she left her glasses at home. We all know the real reason though â€“ sheâ€™s a poor loser. Being a virtual board game with the word â€˜streetâ€™ in the title, Square-Enixâ€™s Boom Street on Wii fills this slot quite nicely.

Bond! You canâ€™t have Christmas Day without a Bond film â€“ itâ€™s an English tradition.

Chances are itâ€™s one that youâ€™ve already seen before, not once but twice. Hello, Activision’s GoldenEye 007: Reloaded.

It turns out Aunty did have her glasses after all, and now sheâ€™s accusing you of cheating in Boom Street… even though it was over two hours ago that you played. The kids wonâ€™t sleep because theyâ€™re hyper on Coca-Cola and after keeping quiet about it all day the wife has finally confronted you about buying her earrings when she doesnâ€™t have pierced ears. It’s a right old Family Feud.