Iâ€™m sure we all remember The Incrediblesâ€™ back-story of superheroes giving up their jobs, due to being sued by citizens suffering from whiplash and such after being rescued. Double Fineâ€™s free iOS download Middle Manager of Justice also taps into Pixarâ€™s idea of going behind the scenes in the world of superheroes, giving you the chance to manage a superhero HQ. 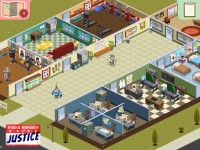 With a mild mannered white collar manager under your control, itâ€™s your job to hire superheroes, train them up and then send them out onto the streets to fight crime. The presentation reminds us of Theme Hospital â€“ the run-down HQ that you start off with is viewed from the same perspective and thereâ€™s a similar quirky sense of humour throughout.

At the top of the screen thereâ€™s a crime map. Tap on this and current crimes can be viewed along with how long thereâ€™s left to respond. Before each real-time battle – which are viewed through a CCTV â€˜hero camâ€™ – you can choose which heroes to send and also view chances of their success. During battles special attacks can be chosen, while any items in your inventory â€“ such as cans of â€˜liquid donutsâ€™ – are used for health boosts or a temporary strength increase. There are also short action sequences to take part in every now and then, like stopping an out of control school bus from crashing. 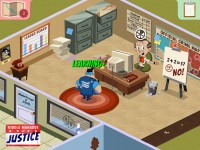 These aforementioned items are purchased using coins earned from saving citizens, while recruiting new heroes and improving their training and sleeping areas requires Superium. Superium is gained steadily through progress, but being the freemium game that it is, it can be purchased using real money to speed things along. Itâ€™s a really enjoyable little game so chances are you will want to send a little money Double Fineâ€™s way out of good will anyway.

The dialogue in particular made us smile on more than a few occasions, especially when the heroes question why their enemy Skullface has such a generic name. â€œAll the good skull-based names were already trademarked,â€ he remarks in response.

Like all good sim games thereâ€™s always something demanding your attention, be it sending off the heroes for a quick nap or upgrading the HQ. The heroes occasionally need a moral boost too, so itâ€™s a good idea to check on their moods often. Once you have four heroes at your disposal things get very lively â€“ later into the game battles can be fought without supervision, so itâ€™s possible to send them off to do multiple good deeds and then collect the earnings once theyâ€™re done and dusted. 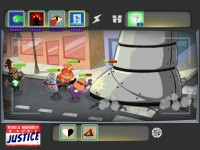 Although Middle Manager of Justice does borrow elements from other games, the amount of polish applied makes it feel as fresh as a new born super lamb. When original games are hard to come by â€“ especially on the App Store â€“ itâ€™s worth a look for this reason alone, let alone the fact that it has been lovingly made.