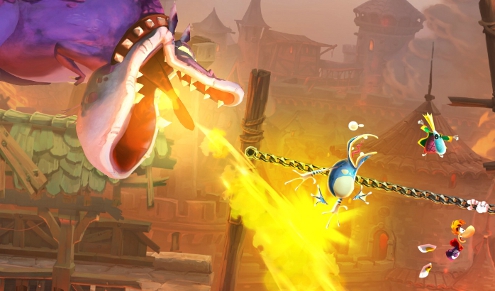 A few Wii U games were curiously absent from the European launch. Itâ€™s frustrating as the reasons why we canâ€™t have the likes of Scribblenauts Unlimted, Ninja Gaiden 3: Razorâ€™s Edge and Sing Party – despite them being available in America – are pretty trivial. Rayman Legends is another one delayed from the launch line-up, but there is at least a good reason – it simply isnâ€™t ready yet.

The demo available now on the eShop is a generous offering, providing three distinctly different levels and a choice of characters including female Viking Barbara. Thereâ€™s a medieval theme throughout, with castles and dragons in abundance, but essentially what we have here is Rayman Origins 2. It looks a clear step up from Origins, which was a very nice looking game to begin with anyway. Characters are slightly more detailed, backdrops are busier and thereâ€™s plenty of flair on display, like when Rayman leaps across planes from foreground to background. Ubisoft also promises new lighting effects and 3D boss battles.

One level sees you start off playing as Rayman before giving you control of Murphy â€“ a tiny flying bug. Murphy is controlled via the touch-screen and has to be used to help an AI-controlled character progress through a castle full of traps. As well as cutting ropes to free platforms, Murphy can also be used to tickle enemies so that they lower their guard. Itâ€™s an amusing touch. There are a few puzzles too, most of which involve tilting platforms by turning the GamePad. The AI seems more than proficient, programmed to patiently wait for you to resolve the problems that lie ahead.

Another level offers traditional platforming frolics without any touch-screen interaction. There are dozens of elements from Rayman Origins present â€“ Raymanâ€™s friends have been locked in cages yet again and need to be found and freed, and those elasticised collectable items return and are placed in very precarious places. Rayman is pleasure to control, remaining incredibly responsive.

The final level is quite the departure â€“ itâ€™s a rhythm action affair where Rayman has to dash through a level avoiding an inferno of flames. Every action, be it attacking a bad guy or collecting a long string of lums, produces a unique sound that seamlessly blends into the rhythm of the music. This level ends with Rayman being chased by a dragon before having a grind on an imaginary guitar in celebration. Barbara meanwhile celebrates using her axe as… an axe, we suppose. Incidentally, her attacks are slightly different from Raymanâ€™s assortment â€“ hold down the attack button and a long range attack can be performed. This suggests that some levels will become slightly easier if you put thought into what character you choose.

As on 3DS, the Wii U eShop demos can only be played a certain number of times. Thirty is the limit set by Ubisoft here, but rather than this demo ending once all three levels are finished youâ€™re simply transported back to the hub so you can try for gold medals. Thereâ€™s also a short video showing other scenes from the full game.

Gorgeous to look at and fun to play, Rayman Legends is shaping up to be one of the Wii Uâ€™s most promising third-party titles. Itâ€™s little surprise to learn that Nintendo themselves are going to be handling it in Japan – as ZombiU demonstrated, Ubisoft really has managed to grasp the concept of what the Wii U has to offer at an incredibly early stage.