We very much doubt that Future Publishingâ€™s offices are full of seasonal cheer at the moment â€“ this week sees the final issues of Xbox World and PSM3 go on sale. 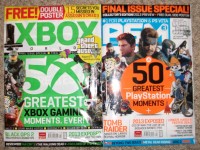 The writers must have been peeking over one anotherâ€™s shoulders for the final issues as both share similar covers, featuring a montage of heroes. The previews and reviews are identical in each magazine this month too, all except for their Tomb Raider previews. We’re not sure why this is.

There is a fair bit of unique content in each, thankfully â€“ look-backs at past issues, the 50 greatest moments in PlayStation / Xbox history, and six page farewells from the editors. PSM3 has a few PS Vita reviews as well, including Call of Duty: Black Ops Declassified.

Both Â£4.99 publications also come with a poster this month instead of a DVD. Xbox Worldâ€™s poster features artwork from Halo 3 along with the words â€œFinished the fightâ€, while PS3Mâ€™s poster stars Solid Snake and images of all their covers which featured Metal Gear Solid… which is a fair old few. They were massive MGS fans, if you weren’t aware.

Future reports that staff are being relocated to elsewhere in the company.

We wish them the best of luck.