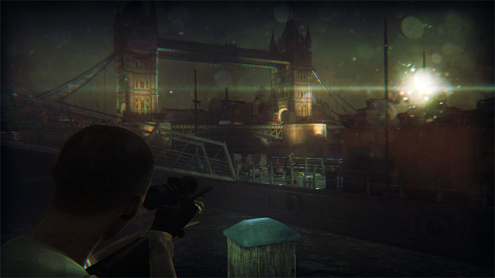 Featuring such attractions as Buckingham Palace and The London Dungeons, ZombiU represents a good way to experience London from the comfort of your own home. Itâ€™s scarily authentic â€“ the rougher areas are full of baseball cap wearing youths, the subway system is packed with brainless idiots who donâ€™t know what theyâ€™re doing, and occasionally a rat or two will come scurrying out from piles of garbage. ZombiU also gives you the added advantage of being able to bash these brainless morons over the head with a cricket bat, which is something you can’t do in real life. Not legally, anyway.

So, the zombie apocalypse is upon us. Thankfully thereâ€™s somebody out there to give a hand to any survivors willing to listen. An ex-soldier known as â€˜The Prepperâ€™ has holed himself up in a secure location and has access to video cameras all over London. He believes the only way to survive is to be prepared â€“ there is no cure or salvation. The Prepper communicates via the WiiU GamePadâ€™s speaker and will do everything he can to help.

As the story unfolds it transpires that there may be a chance to be rescued from London after all. The Prepper, however, will do his very best to persuade you this isnâ€™t the case. The voice acting for your mysterious guardian is superb â€“ he genuinely sounds in utter dismay at how quickly London has fallen into chaos.

The Prepper also supplies you with a â€˜bug out bagâ€™ which turns the GamePad into an upgradable survival kit. The inventory can be viewed on here as well as maps, mission objectives and a sonar radar. The radar is a vital tool in your survival, tracking the whereabouts of any nearby zombies. Every single one is a threat taking several whacks with the cricket bat to kill for good.

It’s because they’re able to lead you to your demise within seconds that itâ€™s sometimes wise to try and avoid conflict by looking for alternative routes. Meet your maker and your current randomly chosen survivor will come back as a member of the undead. When cast back into the boots of another survivor you get just one chance to get your backpack back from your former self. It’s an idea similar to retrieving souls on dying in Dark Souls.

There are a few other comparisons that can be made with that rather challenging RPG. The difficulty level is tough, but not impossible. Far from it in fact â€“ every time you ‘respawn’ (for want of a better word) youâ€™re given a handgun with six shots to give you a fighting chance, and sometimes items reappear in the lockers and such that can be looted. The online functions are very nicely done as well. You can imagine our surprise to enter a random building only to find a list of that dayâ€™s high scores scribbled on the floor in graffiti. You even come across the reanimated corpses of people on your friend list.

Atmosphere is incredibly tense throughout. Thereâ€™s a clever use of filters which lends the game a distinct look, and there are more than a couple of moments designed to have you leaping out of your seat. The use of sound and lighting effects is impeccable. The torch can only be used for a couple of minutes before needing a quick recharge â€“ having the batteries die while exploring a dark area is a harrowing experience, especially if you can hear shuffling in the background.

The environments are quite small, but due to the slow pace and how every situation must be handled with care, they can take quite a while to explore fully. However we did observe that a few areas such as the sewer systems that connect key areas and a few of the safe houses are lazily recycled. Entering two different safe houses only to find the knick-knacks inside lined up on the shelves in identical places did leave us feeling a little disorientated as to where on the map we were. Itâ€™s a minor quibble, but one worth mentioning.

At least ZombiU rarely feels like a slog like some survival horror games do. The use of explosives is brilliant and even helps it to feel fun in places. A few gun turrets can be found here and there to mow down the infected when they come rushing towards, and the zombies are, amusingly, easily fooled â€“ flares can be used to distract them or lure them into armed mines. Indeed, happiness in this game is a backpack full of things that go boom. Ammo is scarce but every now and then youâ€™re treated to a new weapon with a full clip of ammo. Such a find often lured us into a false sense of confidence as not even having numerous health-packs in your possession can guarantee survival.

Later a sniper rifle is added to your inventory. Shots have to be lined up by holding up the GamePad vertically. We found this tricky at first until realising that you can aim using the analogue stick as well as by twisting the GamePad about. The buttons to zoom in and out are logically placed, both within thumbâ€™s reach.

For a launch title ZombiU is incredibly ambitious, and the developers have achieved exactly what they set out to do â€“ create a tense yet rewarding survival horror game that makes good use of the Wii Uâ€™s unique GamePad. It’s fantastic to see a developer fully understanding what the Wii U is all about right from day one.

Whether ZombiU will be mentioned alongside other great launch titles such as Halo and Super Mario 64 in years to come is, however, questionable. Mistake it for a straight-laced shooter and you will die often, forcing you back to safe houses to try again and thus leading to some frustration. Treat every zombie encounter and situation with a degree of thought though, and youâ€™ll find it immensely satisfying.