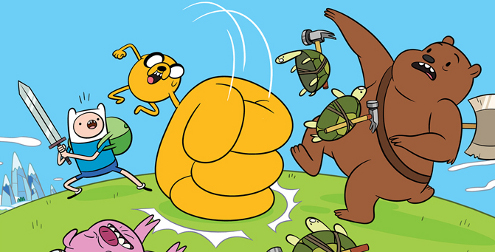 Talk about a match made in heaven. If we were asked to name the developer we would pick to create an Adventure Time game, Wayforward would have been the first to roll off our tongue. The studio has built up a very strong reputation for releasing polished 2D platformers with a hint of retro flair, having worked on Aliens: Infestation, Contra 4, BloodRayne: Betrayal and the underrated A Boy and His Blob in the past. If only more publishers were this thoughtful as to whom they hand their licensed games out to.

The plot is as basic as can be, but thatâ€™s not a bad thing. The Ice King has stolen Finn and Jakeâ€™s garbage, and so the heroic duo give chase through â€˜The Land of Oooâ€™ in order to teach him a lesson. Ooo is split into four distinct areas, each of which features several characters from the show who need a helping hand. Donny the grass ogre is still causing trouble in the Grass Kingdom, while the Candy Kingdomâ€™s Princess Bubblegum has had her pantihose stolen, prompting Lemongrab to falsely imprison three citizens. This mission entails finding evidence that proves their innocence.

Over in Red Rock Pass meanwhile the marauders have a few fetch quests which involve backtracking to previously completed areas, albeit with a few new skills in tow. The final quest in the maze-like Ice Kingdom also involves backtracking but because the map is superbly designed it rarely feels like a chore.

Most of the quest items can be found somewhere in the short 2D platforming sections. Itâ€™s a good job that these only take a minute or so to whizz through as they have to be revisited often. New areas are accessed by unlocking abilities for Jake – the yellow fellow can grow taller, turn into a bridge and later transform into a boat that grants access to the islands surrounding Ooo. Each of the four environments also host one or two boss battles and a dungeon. The dungeons are cleverly designed and although the bosses arenâ€™t too tough – save for the Ice King, who puts up a good fight – they do entertain as each boss has â€˜old skoolâ€™ attack patterns to learn.

Wayforwardâ€™s love for the license is more than evident throughout. Sprites are well drawn and brilliantly animated while the music is some of the best weâ€™ve heard in a while. There are even a few vocal tracks, although they do sound muffled to the point where itâ€™s hard to make out the words. Most of the characters from the show make an appearance and the dialogue remains faithful to the cartoon, raising a smile on more than a few occasions. Theyâ€™ve even sneaked a Zelda reference in there.

The power-ups are based around things seen in the cartoon too, including baby boots that make Finn walk around the top-down map â€œlike a super fast babyâ€.

For a game aimed at the younger generation thereâ€™s a surprising lack of hand-holding and prompts explaining what to do next. Although itâ€™s great to see a game that doesnâ€™t treat the player like an idiot, it can also be seen as a bad thing because when you do get stuck the only way to work out how to progress is to revisit every town and area and talk to everybody again in the hope that maybe youâ€™ve missed something. As such, if you were to play this game with a guide in front of you it could potentially be beaten in just two or three hours. We chose to work things out for ourselves though and so it took us just over six hours to finish.

Small but perfectly formed, Adventure Time is something of a swansong for the humble Nintendo DS â€“ while it lasted we enjoyed every moment of it. You can file this one in that very empty cabinet marked ‘Decent Licensed Games’.

This is an import review of the US version. Sadly, a UK release has yet to be confirmed.