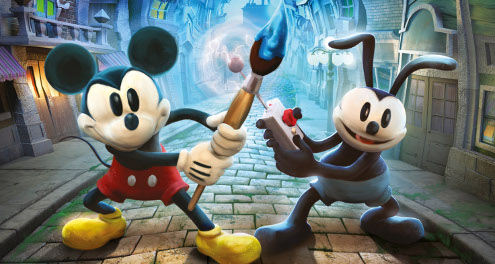 Even though there’s plenty of singing and dancing in the cut-scenes, it feels sad to say that this isnâ€™t the all-singing, all-dancing, sequel that we were expecting. The fact that platformers are thin on the ground these days makes the whole experience that little more disheartening.

At least it impresses in terms of presentation. It looks the part and no expense has been spared rounding up the best Mickey Mouse, Donald Duck and Goofy impressionists in the business. The aforementioned musical cut-scenes are nicely drawn and well animated plus thereâ€™s loads of concept art and other stuff to unlock.

The plot is an intriguing one too. The Mad Doctor makes a surprise appearance in Oswald the rabbitâ€™s home town, claiming that he has changed for the better and wants to warn them of impending evil. Believing that everybody deserves a second chance, Oswald chooses to help the doctor while fellow hero Mickey remains cautious throughout. Should the doctor be trusted? The desire to find out the answer to this question was the only thing that kept us playing to the end.

Mickey returns armed with his paintbrush and thinner â€“ painting the environments to make new items appear remains an inviting play mechanic â€“ while Oswald is armed with a remote control able to shock enemies and power-up electrical devices. Playing in two-player proved to be an incredibly frustrating experience. Going back to split-screen after having sampled the single-screen co-operative delights of the various LEGO games and both Skylanders titles feels like a massive step backwards. All too often we lost track of the other playerâ€™s whereabouts and the small screen-size does no favours for the tricky jumping sections.

Attempting to save Wasteland on your own isnâ€™t any less frustrating. Oswald becomes AI controlled and doesnâ€™t always get into the correct position to solve puzzles, occasionally refusing to power-up items or simply running off in the other direction. Bad design choices don’t help matters like this at all, like the part with platforms that sink into a sea of toxic thinner when you jump on them. This task is made maddening due to the fact that Oswald follows behind and makes them sink twice as fast. So much for that so-called Disney magic.

To Oswaldâ€™s credit, however, he is quite proficient at healing you providing he isnâ€™t too far away. He saved our skin during the boss battles on more than a few occasions.

Speaking of which, the boss battles are one of the few highlights. They arenâ€™t epic or amazingly innovative but they are entertaining. The same can be said about the nicely crafted 2D platforming sections which see the duo running along environments formed of various Disney memorabilia. Others are set during segments of Disneyâ€™s animated shorts from yesteryear.

If youâ€™re planning on purchasing Epic Mickey 2 to keep the kids quiet over Christmas then expect it to do the opposite and prepare to hear â€œI donâ€™t know what to do!â€ often. Although there is a helper character on hand â€“ a gremlin named Gus â€“ a lot of items and treasure chests have been hidden in very obtuse places, making progression slow at times. Quite often itâ€™s not clear what the mission objectives are either, especially when on one of the optional quests.

Oddly, there are not one but two hubs to explore and these too could have benefited from being more user friendly. Thereâ€™s nothing wrong with the idea of having two hubs, but neither are wonderfully designed, and a tutorial or guide of sorts to highlight the areas of importance would have helped them feel less bewildering. We didnâ€™t even realise you could buy new outfits using cloth found in the levels until after finishing the game.

Five hours was all it took to see the ending credits. The story ends abruptly, suggesting that developers Junction Point simply ran out of time. You can however revisit areas again and thereâ€™s certainly lots of stuff to do â€“ statues to make, photos to take and over 170 pin badges to find and collect. Choosing to save or destroy the enemies you come across also affects the ending, giving another reason to return.

Whether youâ€™ll actually want to do so is another thing entirely. This is a game that could, and questionably should, have been a whole lot better. Occasionally Entertaining Mickey would have been a fairer title.