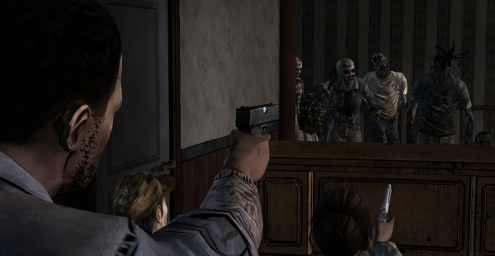 The Walking Dead series should be remembered for a number of reasons. It proved that there was still life left in the point and click adventure genre, and managed to convince us that episodic gaming can be a brilliant thing if handled correctly. Perhaps less significantly, we also learned that Telltale are indeed able to make a decent licensed game. It seems such a long time ago that we were worried how The Walking Dead would turn out, based on how poor their Jurassic Park and Back to the Future games were.

As far as the fast paced world of videogames is concerned, it was a long time ago â€“ April was the first time we were introduced to Lee and Clementine. Telltale has had us on tenterhooks since, leading up to this season finale.

Not a second is wasted getting back into the swing of things â€“ the story carries on from the moment the last episode finished. Clementine has been taken by a mysterious stranger, while Leeâ€™s health has started to take a turn for the worse. Like all of the previous episodes things start with a sequence designed to shock, during which youâ€™re prompted to make a big decision. If this doesnâ€™t draw you in from the off weâ€™d be very surprised.

As the subtitle suggests, time is running out for the group of survivors and so, it would appear, has their luck â€“ everything that could go wrong pretty much does. There are no puzzles this time round but there is a focus on panic and terror, with Lee risking his life on more than a couple of occasions to save Clementine. A brilliant job has been done to illustrate the bond between Clementine and Lee, a child which lest you forget isnâ€™t his own.

A vast amount of QTE events have been used to replace the puzzles we’ve come to expect, while the first person zombie shooting sections – like those we saw quite a few of in Episode Four – have now gone back to having a point and click interface. Ammo is scarce during this section so targets have to be selected wisely.

The confrontation with Clementineâ€™s kidnapper is equally tense, rivalling anything similar seen in a movie or TV show. The ending too is emotional. We really cannot go into it any more than that – this is a very hard game for us to review without letting slip any spoilers. One question does go unanswered, but we get the feeling youâ€™re meant to use your own imagination here to fill in the blanks.

Due to a fast pace this is easily the shortest episode of the lot clocking in at just over two hours. The choices you have to make here however are the most dramatic of all. Chances are you will want to play through it again and make alternative choices to see how the outcomes change the ending. Fans of the statistics that appear at the end of each episode will also enjoy the little extra touch Telltale have added after the credits.

If you havenâ€™t yet jumped onto The Walking Dead bandwagon yet then you may be interested to know that a retail version is due out soon containing all five episodes. It has been a series well worth experiencing and if you havenâ€™t already, then you really ought to – it has been an unforgettable ride.